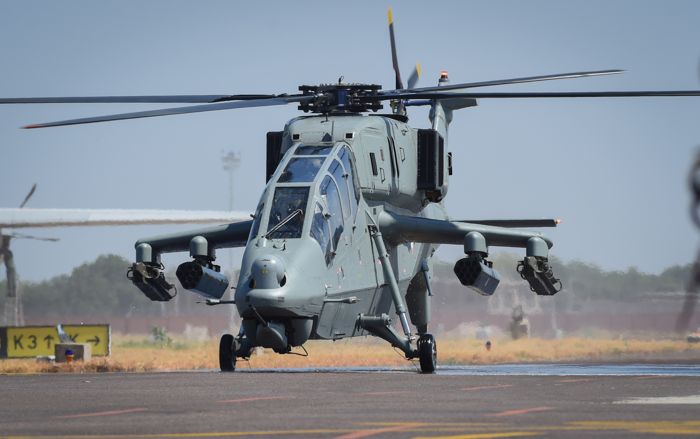 The Indian Air Force (IAF) on Monday inducted the first fleet of indigenously-built light combat helicopter (LCH), which has been developed primarily for mountain warfare. The LCH, designed and developed by Hindustan Aeronautics Limited (HAL), showcases the achievement of the Indian defence sector.

The requirement for combat helicopters was felt during the Kargil War in 1999, when the IAF was tasked with bombing Pakistan-occupied locations at altitudes as high as 18,000 ft. The attack helicopters in the IAF fleet – the Mi25 and Mi 35 – did not have engines powerful enough to carry weapons that high. The Mi17 was used, but it was within the range of shoulder-fired weapons used by Pakistani troops sitting at the heights. One Mi17 went down to the enemy fire and a few others narrowly escaped getting hit.

Prachanda can operate in all possible conditions, and is among one of the best globally in its class. —Rajnath Singh, Defence minister

After the war, the IAF started looking for a helicopter to fire armament at high altitudes. This needed a new engine, it’s now called “Shakti”, jointly produced by French company Safran and HAL. The LCH can fly up to 21,500 feet and launch missiles.

The fleet, comprising four helicopters, was inducted into the IAF at a ceremony at the Jodhpur Air Force Station in the presence of Defence Minister Rajnath Singh, Chief of Defence Staff Gen Anil Chauhan, Chief of Air Staff Air Chief Marshal VR Chaudhari and other senior defence officials.

Naming the LCH as “Prachanda” (fierce), Rajnath said, “It will add significant edge to the IAF’s combat capabilities as it can hit enemy targets with precision.” Singh later flew a sortie on the LCH, which has been inducted into the IAF’s newly raised 143 Helicopter Unit.

The versatility and offensive potential of the copter is on a par or better than most attack helicopters operating globally.”

The LCH has stealth features. It can be used for offensive roles against enemy tank formations, infantry and also UAVs. Pilots will wear a helmet mounted sight. The fuel tanks of the copter are self-sealing.

The copter has built-in crashworthiness of landing gear, crew seats and fuel tanks. It will carry an onboard electronic warfare.