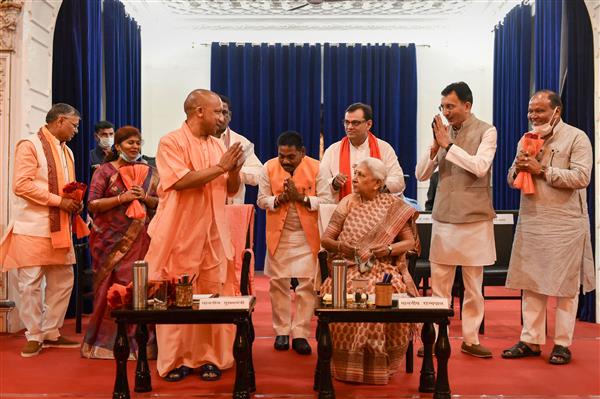 Uttar Pradesh Governor Anandiben Patel and Chief Minister Yogi Adityanath with newly sworn-in state ministers during expansion of the Cabinet ahead of the UP elections, in Lucknow on Sunday. PTI

Uttar Pradesh Chief Minister Yogi Adityanath today brought about the much-anticipated expansion of his Council of Ministers, inducting seven new faces from “underrepresented” communities to strike a caste balance ahead of the Assembly elections early next year.

The new ministers included former Congress leader Jitin Prasada, whose entry is expected to assuage the “upset” Brahmin community as the BJP government under Adityanath (a Thakur himself) was being viewed as “pro-Thakur”.

Prasada, a former minister in the UPA regime, has been given a Cabinet rank. Whether the move will help soothe those believed upset remains to be seen as rival SP, BSP and Congress too have been wooing the Brahmins, who comprise about 13 per cent of the total voters in UP and hold sway among other castes as well.

BJP on a communal trajectory in UP

Polarisation at work in UP

While Gangwar, Prajapati and Bind belong to different OBC communities, Khateek, Paltu Ram and Sanjeev Kumar are from SC/ST communities.

Incidentally, the list did not include high-profile former bureaucrat AK Sharma, believed to be close to Prime Minister Narendra Modi.

Meanwhile, ahead of Samyukt Kisan Morcha’s ‘Bharat bandh’ tomorrow, Adityanath announced a Rs 25 hike in the state advisory price of sugarcane, increasing it from Rs 325 to Rs 350 per quintal for early variety and from Rs 315 to Rs 340 for common variety.

Speaking at the BJP’s ‘Kisan sammelan’ just before the Cabinet expansion, Adityanath said the hike would benefit 45 lakh farmers. He said the interest on outstanding electricity bills would be waived while 119 sugar mills would be operated and linked with ethanol.

At the September 5 ‘Kisan mahapanchayat’ in Muzaffarnagar, BKU leader Rakesh Tikait had targeted the Adityanath government over “low” sugarcane prices. The move is expected to impact the sugarcane belt in western UP, the centre of the farm agitation against the three laws that, which has around 120 Assembly constituencies.

Adityanath claimed that since the BJP took over at the Centre in 2014, nobody had died of hunger, no riot had occurred in UP and no farmer had committed suicide in the country.