March is widely seen as precursor to political strategist’s entry into politics. 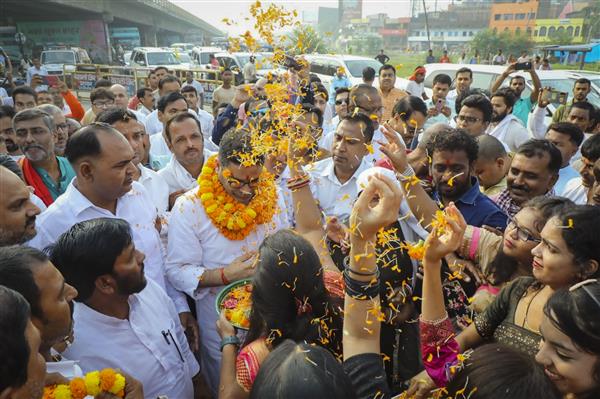 Political strategist and Jan Suraj Abhiyan chief Prashant Kishor being greeted by supporters before his Padyatra on the occasion of Mahatma Gandhi's birth anniversary, at Hajipur in Vaishali, on Sunday, October 2, 2022. PTI

Political strategist Prashant Kishor began a 3,500-km ‘padayatra’ from the Gandhi Ashram in Bihar’s West Champaran district on Sunday, the birth anniversary of the Father of the Nation, as part of his ‘Jan Suraj’ campaign.

The march is widely seen as a precursor to his entry into politics.

Kishor and his supporters will attempt to reach every panchayat and block of Bihar during the yatra which is likely to take anywhere between 12 and 15 months to complete.

He started the march from Bhitiharwa Gandhi Ashram, from where Mahatma Gandhi launched his first Satyagraha movement in 1917.

As the political strategist and his followers embarked on the padayatra, he was greeted by people on the road.

Ahead of the yatra, Kishor tweeted in Hindi that he is determined to change the system in the “poorest and most backward state of Bihar”.

According to him, the first step to achieving a better system in society is a padayatra across the “villages, towns and cities of Bihar”.

A recent statement issued by Jan Suraj said the main goals of the yatra include identifying the “right people” at the grassroots and bringing them on a democratic platform.

While announcing creation ‘Jan Suraj’ platform aimed at transforming his home state Bihar in May this year, Kishor had said he would launch the padayatra on this day.