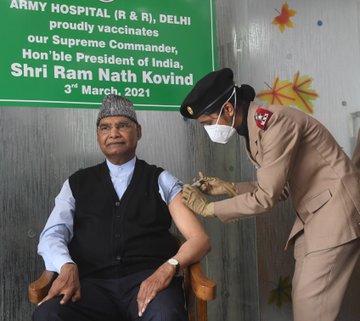 President Ram Nath Kovind was accompanied by his daughter to the Army’s Research and Referral Hospital here today to receive the first shot of the COVID 19 vaccine as India rushed to escalate inoculations to achieve early population based herd immunity.

Kovind tweeted pictures of the inoculation process and also thanked the doctors, nurses, health workers and administrators who are successfully implementing the largest vaccination drive in history and urged all eligible beneficiaries to get vaccinated.

The second shot is due after 28 days of the first.