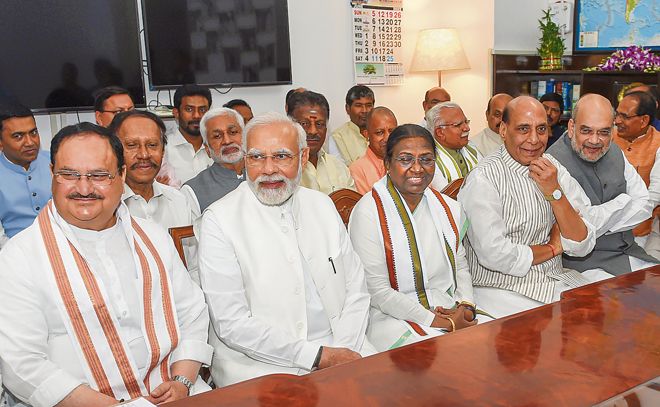 The ruling NDA’s presidential nominee, Droupadi Murmu, on Friday filed her nomination papers for the July 18 presidential elections even as the BJP continued its outreach with the Opposition to build consensus on her name.

Murmu (64), the first tribal candidate to be nominated for the elections to the highest constitutional office of the country, also called up Congress president Sonia Gandhi, TMC chief Mamata Banerjee and NCP supremo Sharad Pawar before filing her papers here.

She was accompanied by Prime Minister Narendra Modi and BJP top brass to the office of the Rajya Sabha Secretary General, the designated returning officer for the poll.

The PM, who proposed the first set of the four nomination papers, sat by Murmu’s side flanked by BJP president JP Nadda and ministers Rajnath Singh, Amit Shah, Nitin Gadkari and Nirmala Sitharaman, among others.

The PM later handed over the set of nomination papers – each proposed and seconded by 50 members of the electoral college (MPs and MLAs) for the presidential elections to PC Mody, Rajya Sabha Secretary General.

The BJP has also reached out to Jharkhand CM and JMM leader Hemant Soren for support and parleys are on.

Murmu’s nomination papers had four sets of proposers and seconders. PM Modi was the first proposer in a set seconded by all parliamentary board members of the BJP.

The second set was proposed by Nadda and signed by Chief Ministers and Deputy CMs of BJP-ruled states and non-NDA leaders backing Murmu.

Himachal and Haryana MLAs and MPs of the BJP signed the third set, while the fourth set was signed by Gujarat BJP MPs and MLAs.

The PM, while addressing the NDA and non-NDA leaders who joined Murmu today, said the occasion was “historic and unprecedented”. He lauded Murmu’s long association with rural India and her spirit of resilience through multiple hardships in life.

Murmu told the gathering she had been humbled by the honour and had been taken aback by the announcement.

A non-committal JMM and an edgy JD(S) appear to have upset the campaign plan of Opposition presidential election candidate Yashwant Sinha. Sinha, who was to launch the campaign, has decided to wait with the JMM veering towards the NDA candidate.