Principal hangs nursery student upside down from school balcony in UP; complaint filed 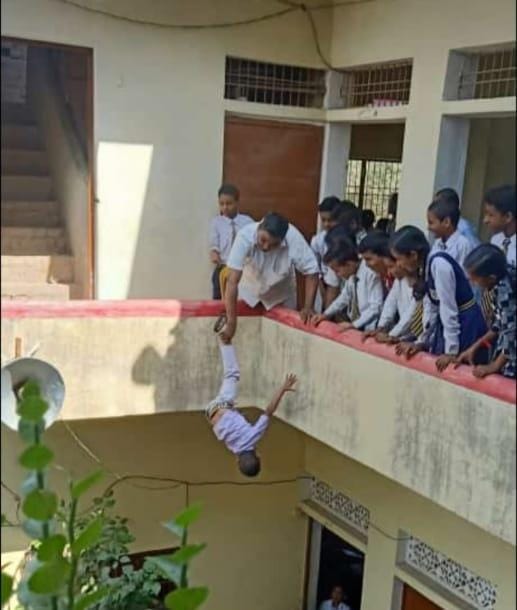 The principal of a school here dangled a Class-2 child upside down from the first floor of the building, punishing him for eating ‘gol gappas’ as other children watched in shock, an official said on Friday.

Following the incident, which occurred on Thursday, an FIR was lodged against Principal Manoj Vishwakarma of the Sadbhavna Shikshan Sansthan Junior High School under Ahraura police station and he was taken into custody, the police said.

A video of the shocking incident has gone viral on social media.

Police said the school headmaster inflicted the shocking punishment on the five-year-old child for having ‘gol gappas’ at a stall outside the school without informing the teacher.

After the child came back to the school, the headmaster caught hold of him by his ankles and dangle him upside down from the first floor of the school building, police said.

This teacher also seems to have been inspired by #Godse:

In a school in #Mirzapur-Ahraura, #uttarpradesh student studying in class 2nd did mischief, then the teacher grabbed his feet and hanged him from the building. pic.twitter.com/9whomOUHaN

Scared by the shocking treatment, the child began crying and told his parents about the incident after reaching home, the police said.

On coming to know about this, the district basic shiksha adhikari too investigated the matter and on the basis of his report, an FIR was registered against the school headmaster, the DM said.

The FIR was registered against Vishwakarma under relevant sections of the Juvenile Justice Act and Indian Penal Code, even as the teacher tendered an apology to the child’s father, regretting his act. PTI