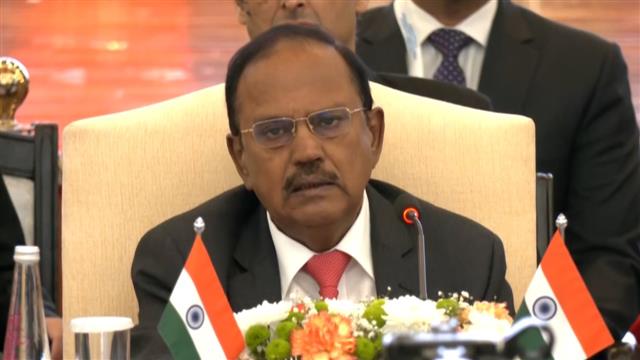 A video grab of NSA Ajit Doval at the meeting in New Delhi.

The National Security Advisers of India and Central Asian countries on Tuesday called for collective action to deal with use of terrorist proxies for cross-border terrorism, terror financing and radicalisation.

A joint communiqué at the end of the meeting agreed that connectivity initiatives should be based on principles of transparency, and respect for sovereignty and territorial integrity of all countries, in a tangential criticism of the China Pakistan Economic Corridor that India says runs through a portion of its territory occupied by Pakistan.

Describing finance as the lifeblood of terrorism, National Security Adviser Ajit Doval in his opening remarks said countering of terrorist financing should be of equal priority to all countries. In an oblique reference to Pakistan’s harbouring of terror networks, he said nations must be asked to fulfill obligations enshrined in relevant counter-terrorism conventions and protocols as well as refrain from providing any form of support to entities persons embroiled in terrorist acts.

The joint communiqué also said the NSAs agreed that fundraising efforts have serious security implications for the region, and therefore, a collective and coordinated response is essential.

“Connectivity with Central Asian countries remains a key priority for India. We stand ready to cooperate, invest and build connectivity in the region,’’ he offered. Taking a swipe at the CPEC, Doval said while expanding connectivity, it is important to ensure that such initiatives are consultative, transparent and participatory with respect to the sovereignty and territorial integrity of all countries.

The NSAs of India, Kazakhstan, the Kyrgyz Republic, Tajikistan and Uzbekistan participated in the meeting while Turkmenistan was represented by its ambassador.

“Afghanistan is an important issue concerning us all. India’s concerns and objectives with regard to immediate priorities and the way forward are similar to those of many around the table,” Doval said.

Central Asian NSAs also spoke on drug trafficking rampant in the region. Kyrgyz NSA Marat Imankulov said the common interest of the six NSAs was to combat terrorism, extremism and drug trafficking as well as resolving the situation in Afghanistan.

“An important topic is Afghanistan and its impact. Considering the processes taking place in Afghanistan, there is danger that IS and other gangs will strengthen there. Continued smuggling of narcotics continues to deteriorate the situation. We expect decisive action (from the Taliban) on terrorism and drug smuggling,” observed Imankulov.

Tajikistan’s NSA Nasrullo Mahmudzoda mentioned other threats in the region such as cyber crime and cyber terrorism, and biological threats besides the “highly destructive ideology of religious extremism which is advancing rapidly’’.

Uzbek NSA Viktor Makhmudov called on the global community not to abandon Afghanistan. “Afghanistan has new strategic possibilities. It can have an era of growth, transport and markets,’’ he said while calling for a common coordinated approach to ensure regional security and development of Afghanistan.