Prasad was arrested by the NCB on Saturday after questioning 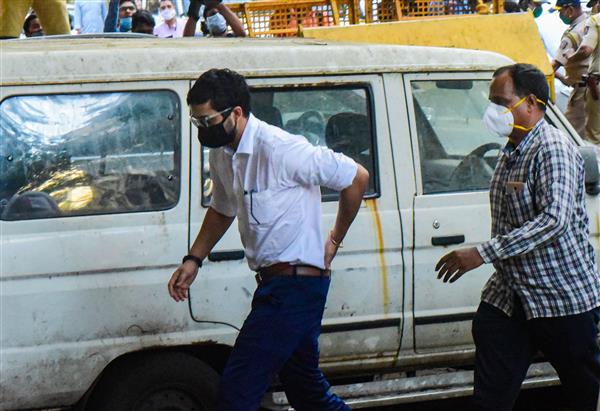 A Mumbai court on Sunday remanded Kshitij Ravi Prasad, who was earlier hired as an executive producer by a firm of filmmaker Karan Johar, in the NCB’s custody till October 3 following his arrest in a drugs case linked to Bollywood actor Sushant Singh Rajput’s death.

Prasad had joined Dharmatic Entertainment (sister concern of Karan Johar’s Dharma Productions) in November 2019 as one of the executive producers on a contract basis for a project, which eventually did not materialise, Johar said in a statement on Friday.

Prasad was arrested by the Narcotics Control Bureau (NCB) on Saturday after questioning.

His name cropped up during the NCB’s wider probe into the alleged Bollywood-drugs nexus.

He was produced before a magistrate court here via video conferencing which remanded him in the probe agency’s custody till October 3 for further investigation.

The NCB on Saturday recorded statements of actors Deepika Padukone, Shraddha Kapoor and Sara Ali Khan in the drugs probe linked to Rajput's death and an alleged Bollywood-drugs nexus.

The probe agency told the court on Sunday that Prasad in his statement said that he had procured drugs from another accused Karamjeet Singh Anand and his associates.

The probe agency further said the investigation into the case revealed that the accused was a part of conspiracy for drug procurement with other accused persons. He was connected with other accused linked to Rajput’s death case, it said.

The investigation into this case is in preliminary stage as revelations made by Prasad are to be verified, the NCB further said.

It also said Prasad was indirectly connected with accused Anuj Keshwani, from whom commercial quantity of a contraband was seized. Therefore, it was necessary to interrogate in deep as to whom the accused was delivering the contraband in Bollywood, it added.

Prasad’s lawyer Satish Maneshinde, however, told the court that the accused was “harassed and blackmailed” to give a statement.

He was also subjected to third degree and ill treatment, the lawyer alleged.

Maneshinde then requested the court to record Prasad’s statement, which it allowed.

Prasad told the court that during a raid at his house the NCB did not find anything, except a stale and dry cigarette butt, which they “believed to be a ganja joint”, a note shared by his lawyer said.

Prasad said his two friends, picked up by the agency, were asked to give a statement against him.

He also claimed that the NCB official, while recording his statement, inserted “patently false claims” despite his protest.

Prasad told the court that his statement was not recorded as per his narration and language. He claimed to have “unwillingly signed the statement after nearly 50 hours of interrogation, humiliation and torment”, the note said.

After hearing both the sides, the magistrate said that detailed custodial interrogation of Prasad was “justifiable” to get the truth out.

On Friday, the NCB had also questioned Anubhav Chopra, who earlier worked with Dharma Productions, in connection with the alleged drug-nexus in the Hindi film industry.

However, according to Dharma Productions owner Karan Johar, he doesn’t know any of them personally.

Johar in a statement on Friday said Prasad had joined Dharmatic Entertainment, sister concern of Dharma Productions, in November 2019 as one of the executive producers on a contract basis for a project, which eventually did not materialise.

The filmmaker said Chopra was briefly associated with his banner as an assistant director and worked only on two projects. PTI