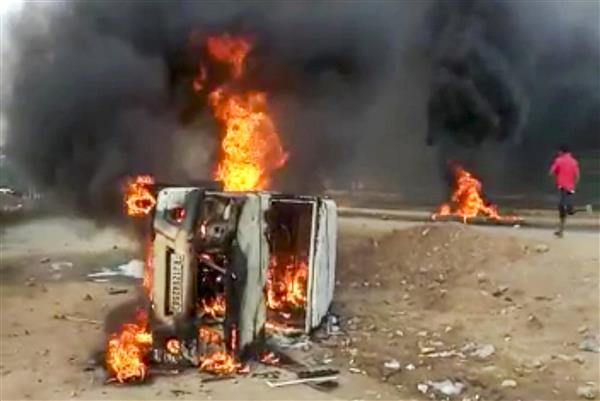 A vehicle torched during a protest demanding recruitment of reserved category candidates on vacant unreserved positions for teachers from the year 2018, in Kakari Dungri village of Dungarpur district, on Friday, September 25, 2020. (PTI Photo)

The situation improved in Rajasthan’s Dungarpur district on Sunday after the Udaipur-Ahmedabad highway, which was blocked by candidates of a recruitment exam for three days, was cleared after a meeting between a delegation of the protesters and public representatives and officials.

The protesters were demanding that 1,167 vacant general quota seats be filled from the Scheduled Tribes (ST) category.

“Police forces are trying to control the situation there also,” she said.

On Saturday, a man was shot dead during the protest and two others were injured, while a group of protestors torched a pickup van.

The police control room said that stones and other obstacles on the highway in Dungarpur are being removed so that traffic movement can be resumed.

Several torched vehicles, stones and boulders are there on a 20-km stretch of the highway.

“Traffic will resume on the highway by tomorrow. After the meeting, which was held in a positive manner today, we conducted a march on the highway to review the situation. Now the things are under control in Dungarpur,” former Udaipur MP Raghuveer Meena said.

Violence erupted in the region on Thursday when the candidates of teachers’ recruitment examination-2018 blocked the highway, pelted stones at police, damaged several properties and torched vehicles demanding filling of 1,167 vacant posts of general quota with ST candidates.

On Sunday, a meeting was held in Kherwara Panchayat which was attended by public representatives, including sitting and former MPs and MLAs of various parties, senior police and district administration officials, community leaders and members of the delegation of the agitators.

“We have appealed to the protesters to stop the violence and restore peace. There was general consensus on this in the meeting. All public representatives of the area were present in the meeting,” Minister Bamaniya told reporters.

Dinesh MN and other officers also conducted march on the highway on Sunday after the meeting to restore peace.

“The situation here is now peaceful. No violence occurred today,” he told reporters.

“Two companies of Rapid Action Force were deployed in the area today. Three senior police officers were sent to Dungarpur Saturday night and the situation at present is peaceful,” he said.

Chief minister Ashok Gehlot too reviewed the situation and held discussions with the officials. PTI