Protesting farmer leaders say they suspect govt snooping on them 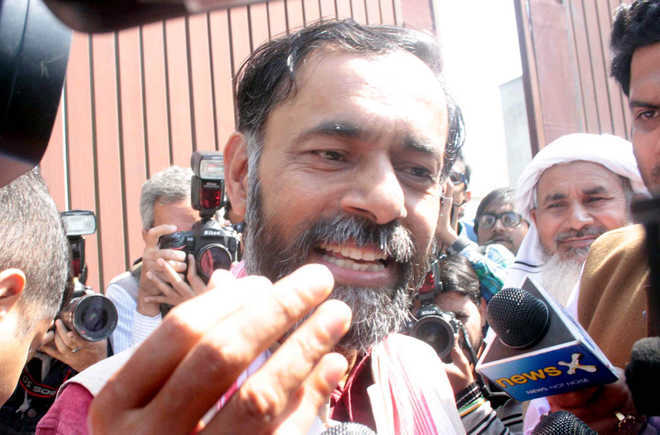 A group of 200 farmers on Thursday held ‘Kisan Sansad’, a parallel ‘Monsoon Session’ at the Jantar Mantar barely a couple of kilometres away from the Parliament where protests by opposition MPs on the three contentious farm laws reverberated.

Agriculture Minister Narendra Singh Tomar again reached out to protesting unions, assuring that the government was always ready to talk with them provided they tell which specific provisions they are objecting to.

“Even today if they tell us to which specific provision of the laws they have objections, we are ready to talk to them. The country is a witness to the laws being pro-farmers and beneficial to them,” Tomar said.

“These are not farmers, these are 'mawalis'"

“Stop calling them as farmers, they are not farmers. They are ‘shadyantrakaris’ (conspirators) who are using the name of farmers. Farmers do not have time to come and sit on Jantar Mantar, these are men of ‘arthiyas’, those who don’t want any benefit to pass on to farmers,” union minister Meenakshi Lekhi said, addressing a press conference.

When she was again asked a question regarding the farmers’ protest, she said: “You are calling them farmers again…they are ‘maawalis’. Whatever happened on January 26 was shameful”.

Lekhi, however, later retracted her statement.

Recently, the minister told the Parliament in a written reply that instead of insisting on the demand for a repeal, unions should discuss their concerns on clauses in the legislation “so that their concerns can be resolved”.

Farmers, who refuted the “hollow claim” of central ministers that they have not really explained their concerns regarding the laws were only harping on their repeal demand, asked the ministers to visit 'Kisan Sansad' to understand their concerns.

Referring to the “unconstitutional nature of the laws and the undemocratic processes by which the Government brought the laws”, in their discussions on the “APMC Bypass Act”, farmers again insisted on a “complete repeal and nothing less”. Through the 'Kisan Sansad', we are showing the government how to conduct Parliament with knowledgeable discussions, they said.

"The government says farmers are uneducated, that we need to be educated regarding the impact of the farm laws. They should come and listen to debates here,” All India Kisan Sabha general secretary Hannan Mollah said. The ‘Kisan Sansad’ is being organised by the Samyukt Kisan Morcha, the umbrella body of the protesting farmer's unions, amid a ring of security around central Delhi and a tight vigil on the movement of vehicles.

Many MPs also visited the protest site at the Jantar Mantar.

Speakers thanked the MPs for their support but did not give them any space on the stage. “We requested them to be our voice inside the Parliament. We also warned them that if they do not work towards securing our demands inside the Parliament, farmers of the country will have to boycott them. If they fail to take up the issue in Parliament, they will face the same farmers’ boycott as BJP MPs,” Yadav said.

BKU leader Rakesh Tikait, who has denied having any political ambitions, said farmers will hold a ‘maha panchayat' in September to devise a strategy for upcoming Assembly elections, including in Uttar Pradesh. “We will not contest, nor support any party. But the medicine we gave in Bengal, we will also give in Uttar Pradesh and other elections. Till the time the government does not recover completely, we will continue with our ‘ilaaj’ (treatment). ‘Inhe aaram milega, hum inka pucca ilaaj karenga. (They will recover. We will do their complete treatment),” Tikait said.

A protestor, Jasbir Kaur, said laws will deprive farmers, agricultural labourers, and mandi workers of their jobs. “When private mandis come, the infrastructure will only benefit Ambani and Adani, not farmers,” she said.