Asks Centre, states to file detailed replies by June 5, next date of hearing 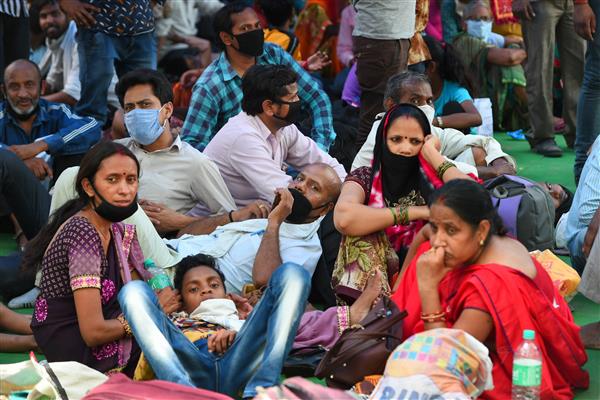 The Supreme Court on Thursday ordered states to provide free food and shelter to lakhs of migrant workers stranded in various parts of the country due to COVID-19 lockdown.

A three-judge Bench headed by Justice Ashok Bhushan also ordered that no fare either by train or bus shall be charged for migrant workers and railway fare will have to be shared by states.

"All Migrant workers who are stranded at various places shall be provided food by the concerned state and UT at places which shall be publicised and notified to them for the period they are waiting for their turn to board a train or a bus, said the Bench  -- which also included Justice SK Kaul and Justice MR Shah.

It emphasised the need for coordinated efforts to deal with the crisis. "There are different mechanisms for different states. How do you ensure that nobody asks the migrant to pay or troubles him? What we are saying is that the migrants should be least concerned with the means of payment," it said.

"The state shall oversee the registration of migrant workers and states to ensure that after registration, they are made to board the train or bus at an early date," the Bench said.

"We further direct that those migrant workers found walking on the roads, immediately be taken to shelters and provided food and all facilities should be provided to them," it said, adding, "As and when the state governments put in a request for trains, railways has to provide them."

"All necessary details regarding number of migrants, plan for transportation mechanism of registration and other details should be brought on record in the reply," the Bench said.

After hearing Solicitor General Tushar Mehta, senior counsel Kapil Sibal, Colin Gonsalves, Indira Jaising, PS Narsimha and other advocates representing various states, the Bench went on to issue the directions saying, "At present we are looking at the miseries of the migrant workers, we are of the view that some interim directions need to be issued."

"We believe that the centre and state governments require to be given some time to bring the steps taken by them on record, it said directing them to file detailed replies by June 5 -- the next date of hearing.

During the hearing, the Solicitor General faced a volley of questions from the Bench on food, shelter, transportation and as to who would foot the bill.

Terming it an "unprecedented crisis", Mehta said around 91 lakh migrant workers had been transported to their native states since special trains started on May 1.

However, Sibal, Jaising and Gonsalves contradicted him saying the way migrant workers were being sent back to their native states it would take several months to complete the process.

At the very outset, Mehta said, "We are immensely grateful to he Supreme Court for taking cognisance of the issue. Due to this, states and Centre have an August forum now to discuss the migrant crisis issue. Some unfortunate things have happened and it is being flashed again and again.

"We are not disputing the fact that Centre has not taken steps. But whoever needs help is not getting that help. States are not doing their bit," the Bench said.

Mehta assured the Bench that the government will not stop its efforts until every willing migrant labourer is sent to his village. He, however, said many of the migrants didn't want to go back as lockdown has been relaxed and activities have resumed.

The Solicitor General said a large number of steps were taken by the government and the Supreme Court was fully satisfied about it earlier. "We have something called prophets of doom who only spread negativity. All these people writing on social media, giving interviews cannot even acknowledge what is being done," he said.

Mehta said people are working tirelessly. From the safai karamcharis to the PM... State governments and ministers are working over night. None of these people acknowledge that. Human race is facing a difficult challenge."

On intervention applications, Mehta said, "Don't let anyone use this platform to become a political platform."

He also drew the court's attention to a letter written by some senior advocates to the CJI onnthe issue. "See the letter which is doing the rounds."

"People who have been part of the institution, if they believe they can run down the institution it is unfortunate. We have to go by our conscience," said Justice Kaul.