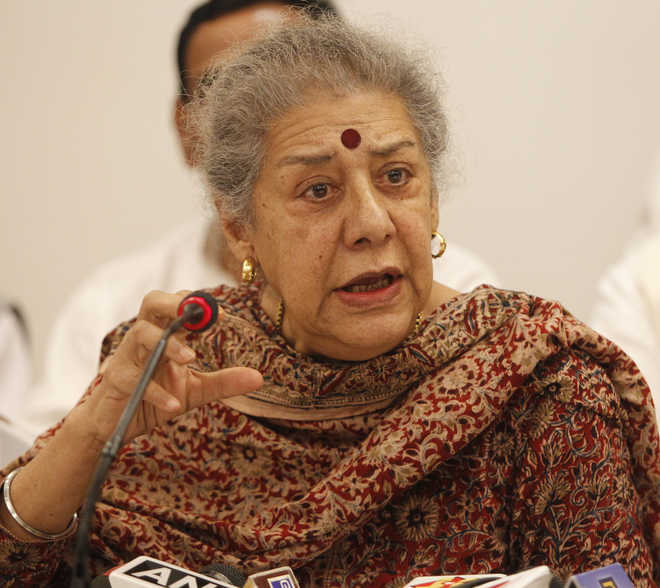 Punjab should have a Sikh CM, I have declined the offer: Ambika Soni

Congress veteran and a long time Rajya Sabha MP from Punjab Ambika Soni on Sunday said she had declined the offer of being Punjab chief minister and believed that the state should be led by a Sikh.

“This is a matter of conviction for me, not just today but for five decades since the reorganisation process that Punjab should have a Sikh chief minister. This is the only state where a Sikh has traditionally led. I have declined to be the CM,” Soni told The Tribune.

It’s learnt that Soni was offered the CM ship two months ago also when the process of Punjab Congress overhaul was underway and she had refused even that time.

“There are some convictions that we live by and my conviction is that a Sikh should lead Punjab,” Soni said.

It’s learnt that the Congress was mulling all probable choices for the post of the CM, conscious also of the attack Capt Amarinder Singh mounted against PCC chief Navjot Sidhu calling him an anti national, and pledging to oppose his candidature as Punjab CM tooth and nail.

Capt Amarinder has conveyed to the AICC leadership that Sidhu as CM was unacceptable.

“What Capt will do next will depend on what we do today,” a Congress functionary said.

Soni said the party exercise was underway to decide on the next CM.

“The parleys are ongoing in Chandigarh where the AICC general secretary is present along with two observers who are meeting all the MLAs and asking them for their opinion. There’s no tussle in the party,” Soni said.

Importantly Capt Amarinder Singh had called on Soni when he had come to New Delhi last to meet Congress chief Sonia Gandhi.