Set to be inducted on July 29 | More advanced than China, Pak fighters 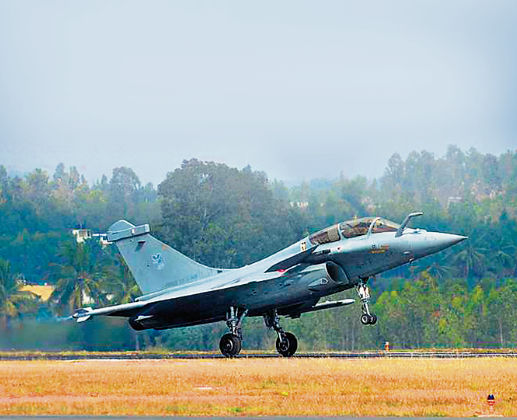 Rafale fighter jets, India’s latest military acquisition, are set to arrive at the Ambala airbase in Haryana on July 29. The jets are fitted with “deadly” missiles and weapons, which are a way ahead when compared with similar capabilities of Pakistan and China.

Features of the war bird

This will be the first induction of the new type of foreign-origin jets since Sukhoi started coming in late 1990s. A total of 272 Sukhoi are on order. Another 12, other than these 272, are to be added. Deliveries of such huge numbers are usually staggered. The only other induction of jets has been LCA Tejas, an indigenous product.

Last week, the Indian Air Force (IAF) had said its pilots and ground crew, after having undergone training, were “fully operational”. India and China are locked in a tense stand-off since early May. Owing to Ambala’s location, Rafale can take off and fly northeastwards towards the G219 highway of China.

Five of these Rafale jets will be flown in from France by Indian pilots. They will be fuelled mid-air. Pilots will take a break at the base of a friendly country in West Asia before flying into Ambala. Post-arrival, efforts will focus on operationalising the aircraft at the earliest. A formal induction ceremony will take place in the second half of August.

The jets come fitted with weapons and missiles from European missile-maker MBDA. These will include Meteor, a beyond visual range air-to-air missile, that can hit enemy targets in the air 150 km away. The Meteor is powered by a rocket-ramjet motor that gives it far more engine power and much longer range. This means it can travel much farther, giving Meteor the ability to chase down and destroy agile hostile fighters.

India’s Rafale fighters will also be equipped with the SCALP deep-strike cruise missile. It can strike at hardened and protected targets deep inside hostile territory without the need for Rafale to enter hostile airspace. SCALP has long range, around 300 km, and it can hit targets in Pakistan and China even if it is hovering over Jalandhar or even Chandigarh.

Rafale is a medium multi-role combat aircraft that is said to boost India’s air dominance exponentially, currently safeguarded by fighter jets like Russia-made Sukhoi Su-30MKI and MiG-29, along with French Mirage-2000 and indigenously built HAL Tejas.