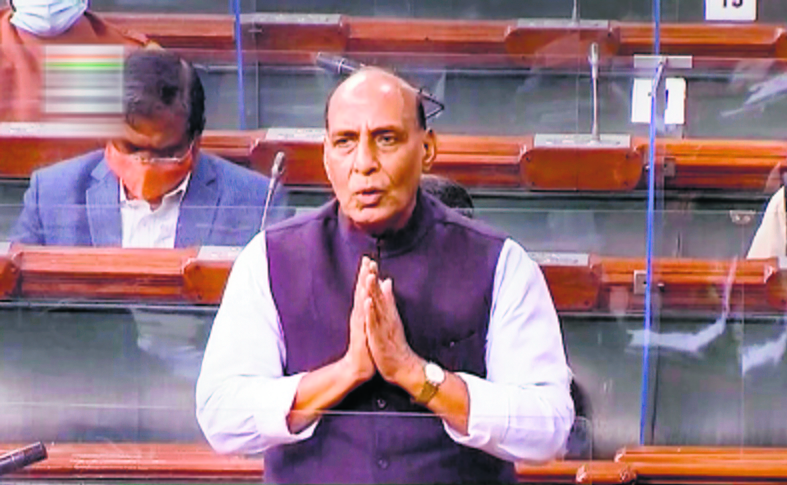 The induction ceremony of the first batch of five Rafale jets at the IAF base in Ambala cost the exchequer a little over of Rs 41 lakh, including Rs 9.18 lakh GST, Defence Minister Rajnath Singh said in the Rajya Sabha on Monday.

The Army has limited Pakistan’s mischief to just the border, giving a befitting reply to their misadventures. No praise is enough for the actions taken by the Army, BSF and other security forces in containing Pak-sponsored terrorist activities. — Rajnath Singh, Defence Minister

“The first five Rafale aircraft were formally inducted into the IAF on September 10. The arrangements for this event were made mostly through local resources of the IAF. The total expenditure on the event was Rs 41.32 lakh, including Rs 9.18 lakh of GST,” he added.

The Defence Minister said traditionally all-new variant of aircraft were inducted into the IAF through a grand ceremony. The Rafale induction ceremony was attended by the French Defence Minister and top executives of the French aerospace major Dassault Aviation, the manufacturer of Rafale.

The second batch of three Rafale jets arrived in India on November 3, while the third batch of three more jets joined the IAF on January 27. The Rafale are India’s first major acquisition of fighter planes in 23 years after the Sukhoi jets were purchased from Russia.

The first squadron of the Rafale jets is stationed at the Ambala airbase, while the second one will be based at the Hasimara IAF station in West Bengal. India signed an inter-governmental agreement with France in 2016 to procure 36 Rafale fighters at a cost of Rs 59,000 crore.

“India will have 17 Rafale jets by March this year and the entire fleet of the fighter aircraft bought by the country will reach by April 2022,” the Defence Minister added.