Rafale may participate in joint exercise in France next year 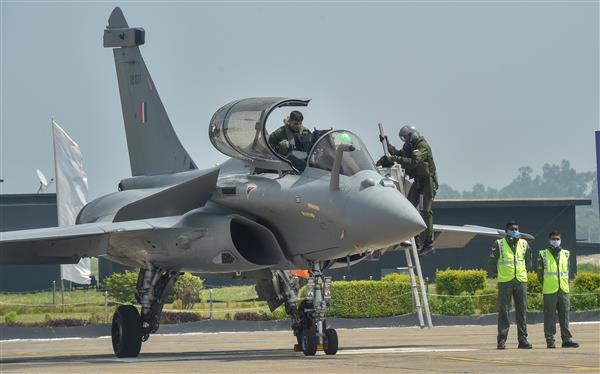 IAF pilots board a Rafale fighter aircraft during its induction into the IAF fleet at the Ambala air base on Thursday, September 10, 2020. (PTI Photo)

Within a year of joining the Indian Air Force, the newly inducted Rafale fighter aircraft may participate in joint military exercises with the air forces of friendly countries.

“Indian pilots train regularly with our air force and navy pilots. We will be delighted to see Indian Rafale aircraft flying on both sides in the training exercises next year, French minister for the Armed Forces, Florence Parly said during the induction ceremony for the aircraft at Ambala on Thursday.

The IAF conducts joint training exercises with several other countries. Alternately, the IAF personnel and aircraft fly out to another country for the purpose of the host the participating country’s men and machines at one of its airbases.

“The name ‘Rafale’, Parly said, “literally means a ‘gust of wind’ or a ‘burst of fire’. Both meanings express an incredible strength and it is also a symbol of the strong ties between two countries.”

The IAF today inducted five Rafale aircraft with No.17 Squadron, the Golden Arrows. The Aircraft had arrived on July 29 after flying a distance of 8,300 km from France to its home base, with an overlay at Abu Dhabi.

Another batch of five aircrafts is expected to join the squadron in October.

The IAF has contracted for a total of 36 Rafale jets in fly-away condition, which would equip two squadrons, the other being No.101 Squadron, the Falcons, which would be based at Hasimara in the northeast.

All 36 aircraft are expected to be delivered by 2021-22. It is after about two decades that the IAF inducted a new fighter aircraft amidst declining force levels.

The Rafale significantly enhances the IAF’s capability as it is a multi-role all-weather fighter aircraft capable for carrying up to 9,500 kgs of ordnance, including beyond visual range air-to-air missiles and long-range stand-off ground-attack missiles and precision munitions. It can also launch nuclear weapons.

With a top speed of Mach 1.8 and a service ceiling of 52,000 feet, its mission profiles include aerial interception, reconnaissance, interdiction, nuclear deterrence and ground support. It also has a comprehensive electronic warfare suite. The IAF has projected a requirement of another 36 Rafale.