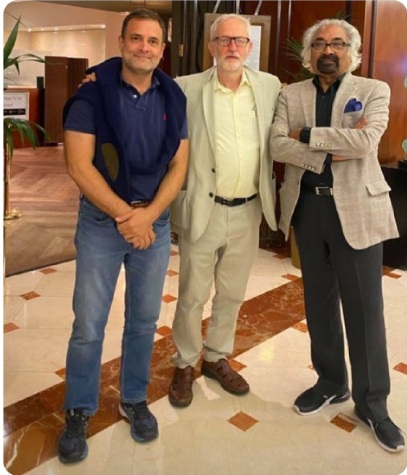 The BJP and Congress today exchanged barbs over Rahul Gandhi’s “meeting” with former Labour Party leader Jeremy Corbyn, “infamous for his anti-India and anti-Hindu stance advocating separation of Kashmir from India”, during his visit to the UK.

New Delhi: Congress leader Rahul Gandhi during an interaction with teachers and students at the University of Cambridge on Monday described his father late Prime Minister Rajiv Gandhi’s assassination as the single biggest learning experience of his life. He was responding to questions at a session hosted by Assistant Professor of Indian History at the university Shruti Kapila.

The Congress retaliated with posting a picture of PM Narendra Modi with the controversial UK leader, questioning whether he endorsed Corbyn’s views on India.

Tagging a photograph of Rahul with Sam Pitroda and Corbyn posted by the Indian Overseas Congress, BJP leader Kapil Mishra questioned: “What is Rahul doing with Corbyn (guy in the centre) in London? Corbyn is infamous for anti-India, anti-Hindu stand.”

BJP spokesperson Shehzad Poonawalla added, “Whether it is meeting with anti-India elements like Jeremy Corbyn, who echo Pak propaganda on Kashmir, or signing an MoU with the Chinese and taking Chinese money into the Rajiv Gandhi Foundation, or meeting the Chinese during Doklam, Rahul stands steadfast with anti-India forces.”

Defending Rahul, Congress leader Randeep Surjewala said taking a picture with a political leader who has different views was “neither a crime nor an act of terror”. Attacking the BJP, he urged for a debate on why PM Modi met “President Xi Jinping, when China has occupied our territory”, why he addressed Mehul Choksi as “Hamare Mehul Bhai” during a function, go to Pakistan to meet then PM Nawaz Sharif, take Nirav Modi to Davos and include him in common photos.