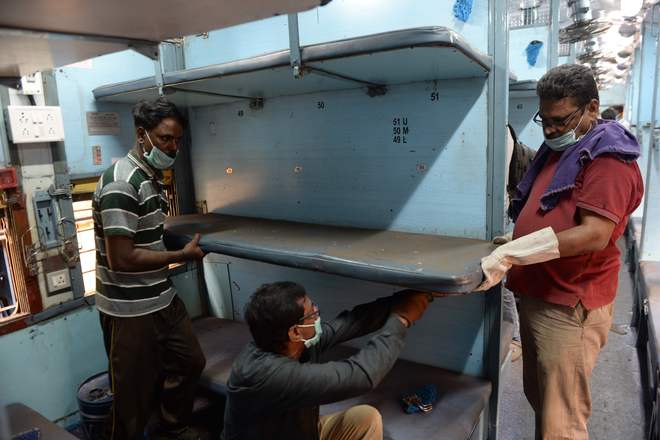 A coach being converted into a temporary isolation ward in Chennai. PTI

Indian railways has started the work to modify 5,000 of its coaches, which are to be converted into quarantine or isolation cabins for Covid patients. Each coach is expected to have 16 beds for isolation. All coaches being used are No air-conditioned. These 5,000 coaches would have the capacity to accommodate up to 80,000 beds.

The Northern Railways, headquartered at New Delhi, has the task of converting 290 such coaches while the Jaipur headquarters North-Western Railway will be converting 266 coaches. The other 14 zones have been given similar tasks, the Railways said today.

One Indian-style toilet on each coach is to be converted into a bathing room. Taps with lift-type handle would be provided in washbasins and also for bathing. The first cabin near the bathing room shall be provided with two hospital-style curtains in the aisle so that the entry and exit to the entire row of cabins can be screened off. This cabin will be used as store and area for paramedics. Two oxygen cylinders will also be provided.

Railways has said it has the capacity to modify 20,000 coaches which can accommodate up to 3.20 lakh beds.