MHA asks UP, Bihar to take action to immediately check the trend as this could lead to further spread of Covid-19 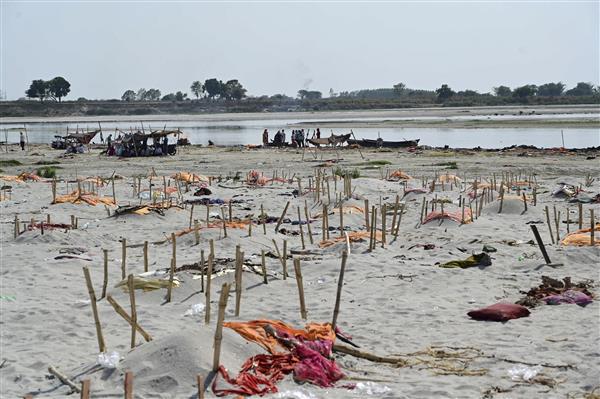 Bodies buried in the sand near the banks of Ganga river, allegedly due to shortage of wood for cremation, during the second wave of coronavirus, at Shringverpur Ghat in Prayagraj, on Saturday, May 15, 2021. PTI

Rains earlier this week in central and eastern parts of Uttar Pradesh not only exposed the vulnerability of rural population amid ravaging Covid-19 pandemic, but also created “havoc and horror” among the masses, as it uncovered “mass shallow graves” along Ganga in different districts with several of the media reports suggest recovery of more than 2,000 such corpses.

In the meantime, the Union Ministry of Home Affairs (MHA) has also taken a serious note of the development and advised Uttar Pradesh and Bihar (the two most populous states) to “immediately” check the trend as this could lead to further spread of Covid-19 infections.

In just five days since Bihar’s Buxar district authorities informed about fishing out 71 bodies of suspected Covid-19 victims from the river Ganga, which they claimed to have come from the neighbouring eastern UP, several media reports suggested that over 2,000 abandoned bodies were found in various UP districts. They claimed that these bodies were hastily buried along the banks of Ganga in several districts, including Kanpur, Unnao, Ghazipur, Kannauj, Ballia and Ghazipur.

Noting that the visuals of the banks of Ganga are “certainly quite disturbing, a senior official of the UP government said, the state administration is seized of the matter and took a number of steps to arrest the trend. “These include giving Rs 5,000 to the next of kin of the deceased persons, enhancing patrolling along the river course by teams of SDRF and PAC’s water police and sensitising village Panchayat leaders to ensure that people do not abandon their dead relatives,” he said.

Brijmohan Mishra, a social worker and activist, told The Tribune that the root cause of such a trend of abandoning bodies is largely the highly contagious nature of coronavirus. “People fear to get infected with the virus and so they don’t touch bodies. Even the local authorities belong to the same social background and then since the number of deaths in a given time period is so high, the state support system appeared to have collapsed completely,” he said.

Mishra said when he talked to family members of some of the victims, they told him that they either didn’t have enough financial resources or felt stigmatised to offer respectful cremations to the dead.

Both UP and Bihar share a long river bank of the Ganga of more than 1,400 km. Sources in the MHA said the trend of dumping bodies was being noticed largely in four districts of UP -- Kanpur, Ghazipur, Unnao and Balia -- from where bodies were also going further downstream to Bihar. Both states have been asked to take immediate corrective steps, they added.