Rajasthan Cong crisis: BJP says 'It is all about dynasty. Ashok Gehlot knows his son will be marginalised with Sachin Pilot as CM' : The Tribune India

‘No hand in crisis but doors not closed for Sachin Pilot’, says BJP 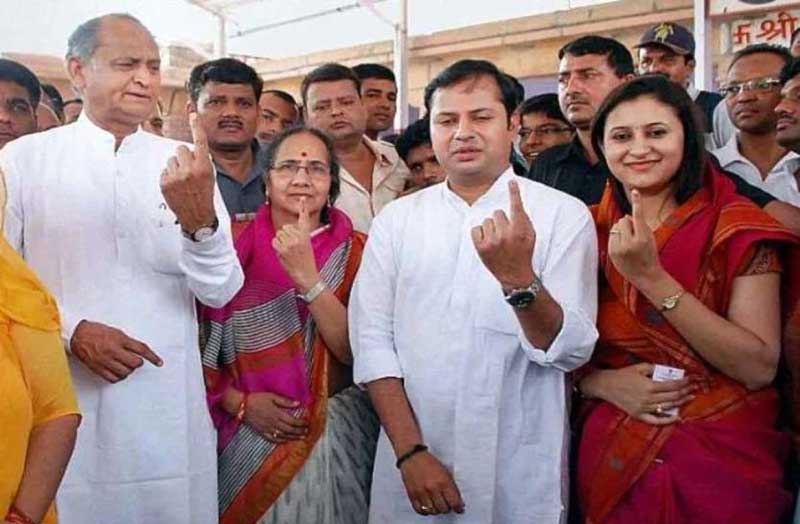 As Congress stepped up damage control to minimise the embarrassment caused due to open rebellion in the Rajasthan state unit where it is in power, members of the opposition BJP claimed “absolutely no hand” in the crisis. “It is all about dynasty”, BJP leaders said, adding that the “doors are not closed” for Sachin Pilot—Chief Minister Ashok Gehlot’s bête noire and apparently also the root cause of the crisis within his party.

Senior BJP leader Satish Poonia, who along with Gajendra Singh Shekhawat, Vasundhara Raje, and Kailash Choudhary, is believed to be one of the contenders for the CM post if the party comes to power, was quoted as saying that “doors are not closed for Sachin Pilot. If such a situation arises (Pilot decides to join BJP), the central leadership will take a call”.

In Delhi, BJP leaders said that the ongoing tussle in Rajasthan Congress was “an internal matter in which they had no hand whatsoever”. However, keeping in mind the fact that BJP is the main opposition in Rajasthan, they are “keeping a close watch on developments there”.

BJP spokesperson RP Singh said it was “all about dynasty”.

It is all about Dynasty.@ashokgehlot51 Gandhi & Vadhara Presidental nominee has openly rebelled against the Delhi Dynasty.
It is all to secure his son's @VaibhavGehlot80 future. Ashok Ghelot knows his son will be marginalised with @SachinPilot as CM Rajasthan. pic.twitter.com/C2OXoJpfDT

“Sonia Gandhi, Rahul Gandhi and Priyanka Vadra’s presidential nominee has openly rebelled against the Delhi dynasty to secure the future of his son Vaibhav Gehlot. Ashok Gehlot knows his son will be marginalised with Sachin Pilot becoming the chief minister of Rajasthan,” Singh said.

The Rajasthan political crisis erupted in the backdrop of the Congress holding its first presidential elections in 22 years. Though two non-Gandhi candidates Ashok Gehlot and Shashi Tharoor were projected as main runners in the exercise, saffron leaders have been calling it “fake and sham” from day one.

Now they say that Gehlot may “pull himself out or be pulled out of the race”.

If Gehlot wins he will have to resign as Rajasthan's chief minister in accordance with the Congress’s “one party, one post” rule and nothing would upset him more than Pilot taking over as the CM. Amid the prevailing circumstances in Congress, observers add that nothing would suit BJP better than one of the Gandhis, especially Rahul Gandhi, taking over as party president.

“He fits the BJP’s 2024 attack against the Congress on all aspects. Despite winning just around 52 Lok Sabha seats, the Congress enjoys a trusted vote share of around 20 percent in the country. BJP will not like to lose the opportunity to hit out at Congress using Rahul Gandhi as a tool, to make gains” they add.

The BJP will approach 2024 with an anti-incumbency of 10 years and issues like jobs, inflation and economic growth. Therefore, it will not only have to maintain its current vote share but also add and register gains to offset any losses it may suffer in traditional strongholds.

Notably, in 2019 general elections the BJP registered vote share of 37.36 percent to bag 303 seats. Congress, on the other hand, managed just around 52. However, its vote share was 19.49 percent. In other words, a nine percent vote shift between the two parties has the capacity to shift fortunes on either side.