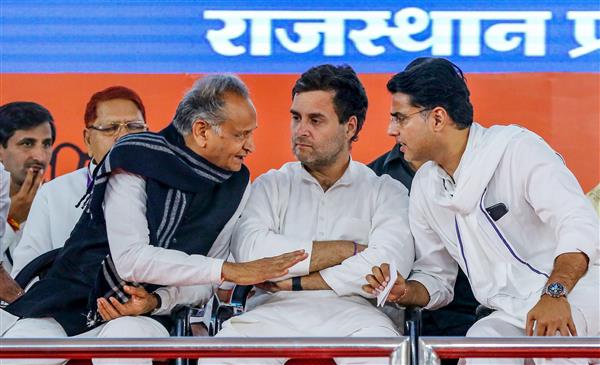 Upset over an open rebellion in Rajasthan, Congress President Sonia Gandhi on Monday sought a written report on it from party observers Mallikarjun Kharge and Ajay Maken as the chances of Ashok Gehlot becoming the party chief receded and other names cropped up for the post.

Kharge and Maken, who were sent as observers to Jaipur for a Congress Legislature Party (CLP) meeting, briefed Gandhi in the evening after their return to Delhi and termed the parallel meet held by Gehlot loyalists as “indiscipline”.

They are expected to recommend disciplinary action against those behind the move, including minister Shanti Dhariwal and Rajasthan Congress chief whip Mahesh Joshi.

Gehlot loyalists had submitted resignation letters to Assembly Speaker C P Joshi on Sunday evening, in an apparent bid to put pressure on the central leadership to pick someone from the Gehlot camp as CM if the veteran leader is elected the party president.

The loyalist MLAs indicated that they were against the appointment of Sachin Pilot, who led a rebellion against Gehlot in 2020, for the post.

Both Gehlot and Pilot spent the day at their Jaipur homes. Pilot met his supporters, but they refrained from publicly commenting on Sunday’s developments. Gehlot performed a Navratri puja.

Sonia Gandhi is reportedly “upset” over the Rajasthan developments as Gehlot was being considered as her successor for the top post.

Sources said Gehlot told the two observers that he is not behind the Jaipur development and the MLAs involved in it were not listening to him.

But the drama put a question mark on whether Gehlot would still run for the party president’s post or someone else would replace him as a candidate supported by the current leadership.

Congress leader Kamal Nath, who met Sonia Gandhi Monday, ruled himself out as a candidate. He has reportedly stepped in as a troubleshooter for his party.

Kharge and Maken are likely to submit their report to Gandhi about the crisis in the party’s state unit by Wednesday.

After a nearly one and half hour-long meeting with Gandhi, Maken told reporters that it was “unfortunate” that the CLP meet could not be held.

“When a CLP meeting is held, holding a parallel meeting of MLAs is prima facie indiscipline,” he said.

Accusing the MLAs in the Gehlot camp of “indiscipline”, Maken said their demand setting conditions for a resolution authorising the party president to pick the next chief minister was a “conflict of interest”.

“In the 75 years of Congress history, there has never been a conditional resolution. The resolution is one line only. Everything is told to the Congress president and then a decision is taken,” he told reporters in Jaipur.

“The resolution should not have any conflict of interest,” he said, elaborating that anyone contesting the election could become party president and then decide on the resolution.

He said there was a clear direction to them from Sonia Gandhi that “we speak to every MLA and submit a report, and then the Congress president would have taken a call after speaking to everyone”.

He said representatives of some MLAs came to them in Jaipur to put forward three conditions.

One of them was that the decision on the resolution would be taken after the organisational polls, and this should be part of the resolution.

In an indirect reference to Gehlot, he asked how is it possible that a person authorising the Congress president to take a call on the next CM, himself takes a decision on it after winning the party election.

“If this is not conflict of interest, then what is,” he said.

Maken said the MLAs loyal to Gehlot wanted to meet them in groups, and were told by him and Kharge that there was no precedent for this. One-on-one meetings are held during CLP meets so that MLAs can express themselves freely, he said.

Adding to the turmoil, Congress chief whip in Rajasthan Assembly Mahesh Joshi said the party MLAs have no objection to whoever is made the chief minister, but the final decision of the high command should be agreeable to them.

“The doubts of the MLAs should be cleared by the high command and then whatever decision is taken will be accepted. We do not have any objection if anyone is made the chief minister but the final decision should have consensus,” Joshi said.

Congress sources said 82 MLAs loyal to Gehlot are likely to hold another meeting to decide their next course of action.  They say they want someone who stood with the Congress government during the political crisis in Rajasthan in 2020 to be the next CM.

In July 2020, Pilot and 18 other party MLAs had rebelled against Gehlot’s leadership.

The Congress has 108 MLAs in the 200-member Rajasthan Assembly. PTI