The developments have miffed the section of opposition parties. 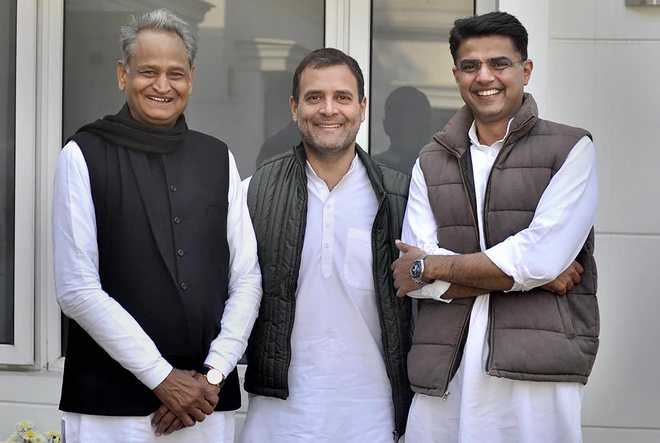 The infighting in the Congress in Rajasthan has cast doubt on the longevity of the party in the national political landscape.

The infighting in the Congress in Rajasthan has cast doubt on the longevity of the party in the national political landscape.

The development in the state has discomfited the opposition parties at the Centre who apprehend that it could give momentum to the BJP in upcoming assembly elections in some states.

The Congress is the largest opposition party at the Centre and has a promise to act as a sheet-anchor against the BJP.

But its house being disorder presents bad optics, and a general sense of losing out to the BJP in the war of perception, besides weakening the united fight against the BJP.

The Congress lost its government, and a young star in Jyotiraditya Scindia, to BJP in Madhya Pradesh when 22 of its MLAs under his leadership deserted it.

They raised rebellion to the kill against the Congress leadership.

The present Congress crisis in Rajasthan has struck the opposition parties with a sense of deja vu. With internecine struggle in the organisation, the suspense on the stability of the government would remain.

Reports say that Ashok Gehlot-led Congress government hangs the by skin of its teeth with state party president and Deputy Chief Minister Sachin Pilot raising a banner of revolt against the Chief Minister and the party’s central leadership.

Pilot, youth Congress, and MLAs supporting him have camped in a hotel in Manesar in Haryana holding the red flag in defiance against Central leadership.

Sources said the possibility of these Congress MLAs petitioning to the Haryana Police to ensure their safety can not be ruled out in case they get a sense that a desperate Gehlot government and the Congress would adopt to “cut and thrust” approach to holler them back to the stable.

These developments have miffed the section of opposition parties.

A slew of Assembly elections, starting with JDU-BJP-LJP ruled the state of Bihar in October-November, are slated in the immediate future.

The Left, which has two MLAs( CPI-M) in Rajasthan, and which supports the government, is visibly upset at the development in the state.

CPI chief D Raja minced no words saying that the Congress should set its house in order, and manage its affairs in a better way.

“The fiasco in Madhya Pradesh followed by avoidable situation in Rajasthan has the potential to give BJP an advantage in Bihar and West Bengal,” Raja said, and added that the BJP is a “past master in fishing in troubled waters and horse-trading.”

Raja said efforts to should be made to strengthen the arc of opposition against the BJP.

AAP Rajya Sabha MP Sushil Gupta said that the Congress leadership should be more accessible and in tune with its leaders.

“Developments like Rajasthan and Madhya Pradesh do weaken the opposition’s strength at the Centre,” Gupta added.