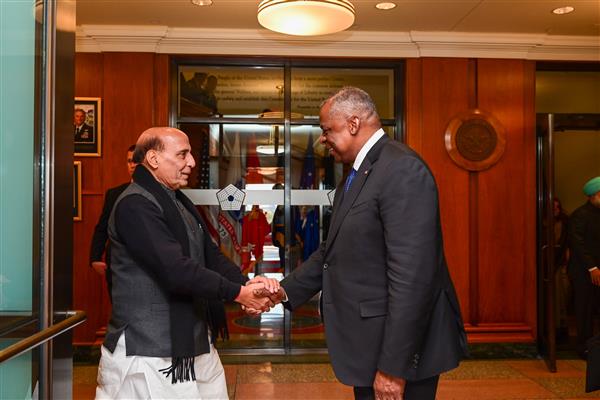 India and US today conducted meetings at the highest levels to discuss ways for a closer collaboration between the defence industries of the two countries for co-development of military equipment.

Ahead of the 2+2 ministerial dialogue between India and the US in Washington, Defence Minister Rajnath Singh on Monday had bilateral talks with US Secretary of Defence General Lloyd Austin. Rajnath underlined the need for co-development, co-production of military equipment by India and US companies and invited American companies to India for the manufacturing and maintenance of defence equipment.

The two Defence Ministers reviewed the entire gamut of bilateral defence cooperation and the regional security situation. “Both ministers acknowledged the salience of India-US defence partnership for peace, stability and prosperity in the Indo-Pacific and broader Indian Ocean Region,” a statement of the Indian Ministry of Defence said. India and US discussed ways to deepen major defence partnership (MDP) and work together to advance quality and scope in bilateral defence cooperation.

This is the fourth edition of the ‘2+2 dialogue’, and the first under the Joe Biden administration. Rajnath on Monday received an “enhanced honour cordon” at the Pentagon, the headquarters of the US Department of Defence. During the enhanced honour cordon, national anthems are played. Earlier in the day, Rajnath met senior executives of American companies Boeing and Raytheon and asked them to take advantage of policy initiatives in India to steadily march from ‘Make in India’ towards ‘Make for the World’.

US Secretary of State Antony Blinken also met EAM S Jaishankar. This year’s event will celebrate 75 years of diplomatic relations and reaffirm the importance of the US-India partnership in ensuring international peace and security.