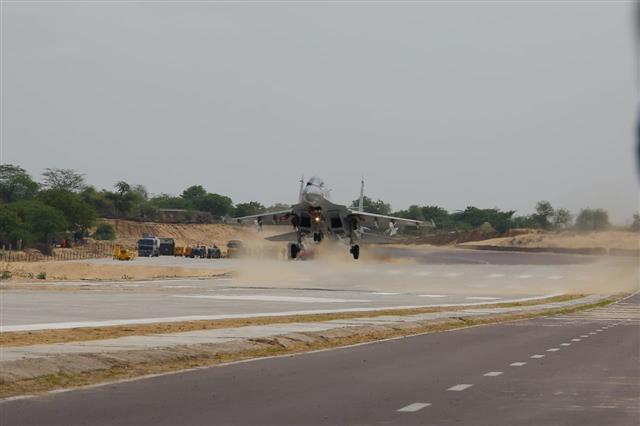 An-32 military transport aircraft and Mi-17v5 helicopter of the IAF also landed at the ELF, showing its complete operational readiness to act as an auxiliary military airbase. Photo credit: Twitter/@rajnathsingh

Sukhoi-30MKI fighter jet also conducted a mock emergency landing at the ELF in front of the two ministers.

An-32 military transport aircraft and Mi-17v5 helicopter of the IAF also landed at the ELF, showing its complete operational readiness to act as an auxiliary military airbase. 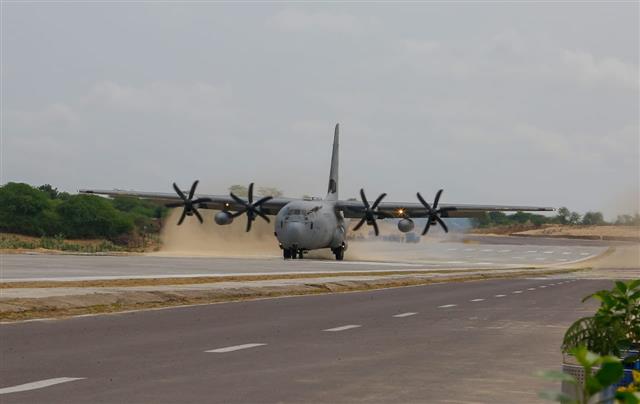 The National Highways Authority of India (NHAI) has developed the 3-km section of Satta-Gandhav stretch of NH-925 as an ELF for the IAF. In October 2017, fighter jets and transport planes of the IAF had conducted mock landings on the Lucknow-Agra Expressway to show that such highways can be used by the IAF planes for landing in case of an emergency.

The Lucknow-Agra Expressway, which is not a national highway, comes under the Uttar Pradesh government.

Officials told PTI a total of 27 other highways, apart from the one in Barmer, are being currently studied jointly by the IAF and the NHAI to see if emergency landing strips can be developed on them.

The emergency landing strip, which was inaugurated on Thursday, is part of newly developed two-lane paved shoulder of Gagariya-Bakhasar and Satta-Gandhav section having total length of 196.97 km and costing Rs 765.52 crore under the Bharatmala Pariyojana.

This highway project will improve connectivity between villages of Barmer and Jalore districts located on the international border.

Apart from the emergency landing strip, three helipads (size 100x30 metres each) have been constructed in Kundanpura, Singhania and Bakhasar villages under this project, according to the requirements of the IAF and the Indian Army. PTI