Eye on China, US and India agreed at 2+2 meet to coordinate more closely in the region 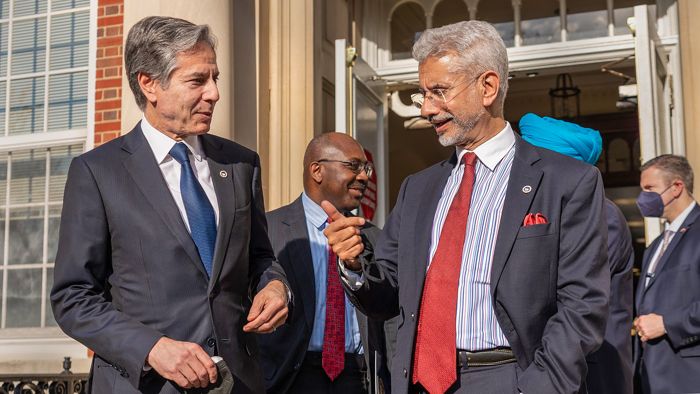 Defence Minister Rajnath Singh flew from Washington to Hawaii for a visit to the headquarters of the United States Indo-Pacific Command (USINDOPACOM), a unified combatant command of America’s armed forces for the Indo-Pacific region.

On his arrival, Rajnath was received by USINDOPACOM commander Admiral John Aquilino.

If in 2022, we have relationship with Russia, the US or China or any other country, these are not ties that appeared instantaneously and are sort of susceptible to immediate solutions or changes… there is a trendline. —S Jaishankar, EAM

On April 11 in Washington, Rajnath along with External Affairs Minister S Jaishankar was part of the 2+2 ministerial dialogue with US Secretary of State Antony Blinken and US Secretary of Defence Feneral Lloyd Austin. After the meeting, Austin had said “we have identified new opportunities to extend the operational reach of our militaries, and to coordinate more closely together across the expanse of the Indo-Pacific”.

The two sides also committed to holding high-end exercises together and had agreed to reinforce ties with like-minded countries, including Japan, Australia and European allies and partners, the Secretary of Defence said.

The USINDOPACOM and Indian forces undertake wide-ranging engagements, including a number of military exercises, training events and exchanges.

Rajnath is slated to visit the Pacific Fleet and training facilities in Hawaii. He is also expected to lay a wreath at National Memorial Cemetery and visit Headquarters of the US Army Pacific and Pacific Air Forces during his stay in Hawaii.

Pakistan has rejected the ‘unwarranted reference’ in the Indo-US ‘Joint Statement’ issued 2+2 Ministerial Dialogue and conveyed its objection to the US. The statement asked Pak to take “immediate, sustained, and irreversible action’’ to ensure no territory under its control is used for terrorist attacks. It also called for perpetrators of the Mumbai and Pathankot attacks to be brought to justice. TNS