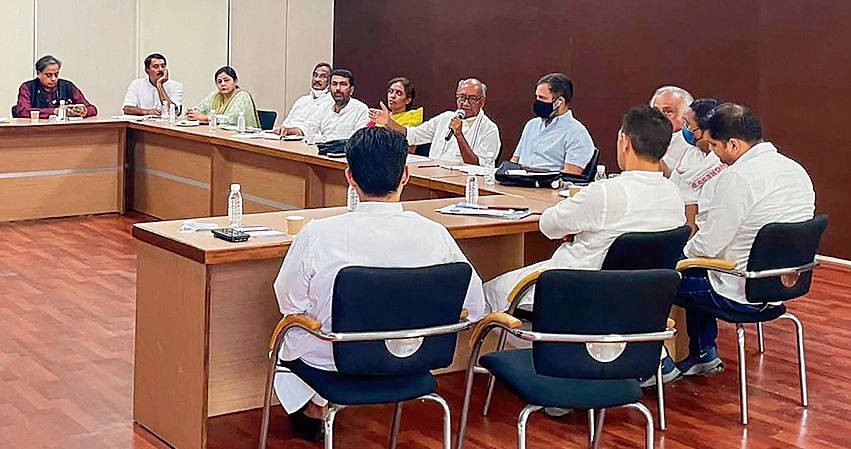 Rahul Gandhi among other senior Congress leaders at a meeting of the party's central planning group in New Delhi. PTI

Ahead of the June 10 Rajya Sabha elections for 16 seats in four states, the Congress on Sunday appointed party observers in Haryana, Rajasthan, Karnataka and Maharashtra.

Parallel to this, the Congress continues to woo MLA Kuldeep Bishnoi, who had skipped the nomination filing process of official candidate Ajay Maken in Haryana, raising anxieties. Rahul Gandhi is personally said to have spoken to Bishnoi, who has kept his cards close to the chest.

In Rajasthan, too, the party is actively wooing Independents, who will determine the victor. Chief Minister Ashok Gehlot on Sunday met six MLAs, who were elected on the BSP ticket and later merged in the Congress, and claimed their support even though the BSP issued a whip yesterday asking them to vote for BJP nominees in the state. Independents hold the key in Rajasthan, where the Congress has shifted over 40-odd MLAs to an Udaipur resort to stall any horse-trading attempts and has claimed it has 126 MLAs behind it.

In a 90-member Haryana Assembly, the first winner needs 31 votes and the second 30, with Maken counting on all 31 Congress MLAs, including Bishnoi.

Elections are also to be held in Maharashtra for six seats and in Karnataka for four.

New Delhi: The Congress on Sunday announced it would undertake the Kanyakumari to Kashmir “Unite India” rally from October 2. The announcement was made by former Madhya Pradesh CM Digvijay Singh, recently appointed convener of the Bharat Jodo Yatra by party president Sonia Gandhi. TNS