According to a statement on Marudhar Arts’ portal, Kam Bakhsh took active part in the wars 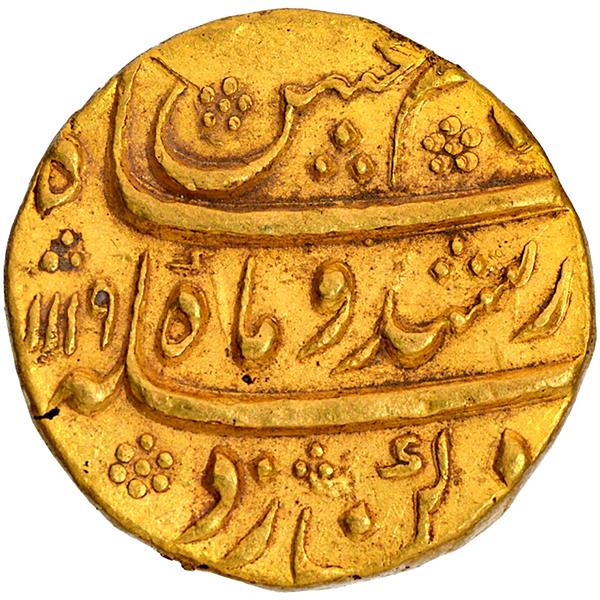 Marudhar Arts, a leading numismatic auction house here, held the auction at a price ranging between Rs 45 lakh and Rs 50 lakh, but it was sold for Rs 56 lakh.

Rajendra Maru, the CEO of Marudhar Arts, told PTI the gold ‘Mohur’ of Bijapur Dar-uz-Zafar mint has a Persian legend and brought in Rs 56 lakh.

He, however, did not disclose the name of the buyer.

“The coin, weighing 10.90 gram, is almost uncirculated. So it’s unique,” Maru, who is organising the auction, said.

According to a statement on Marudhar Arts’ portal, Kam Bakhsh took active part in the wars.

In 1707, he seized the control of the Bijapur fort and declared himself the king.

His inefficiency in handling administration led to the collapse of his kingdom, they said.

The older son of Aurangzeb, Shah Alam Bahadur after taking reins of the Mughal empire took a serious note of Kam Bakhsh striking coins in his name.

In a pitched battle that ensued between the two armies on 13 January 1709, Kam Bakhsh was captured and the next day he died of wounds.

This coin is unusual and important, Marudhar Arts said explaining that coins of Kam Bakhsh are known from a number of mints  Bijapur, Ahsanabad, Nusratabad, Haidarabad, Torgal, Gokak, Imtiyazgarh  but this combination is not yet recorded for any of these issues.

“We do not know when Kam Bakhsh declared himself the emperor but it must have been sometime in March 1707, soon after the fort of Bijapur came under his control, but we don’t know the exact date for this event,” the statement said. — PTI