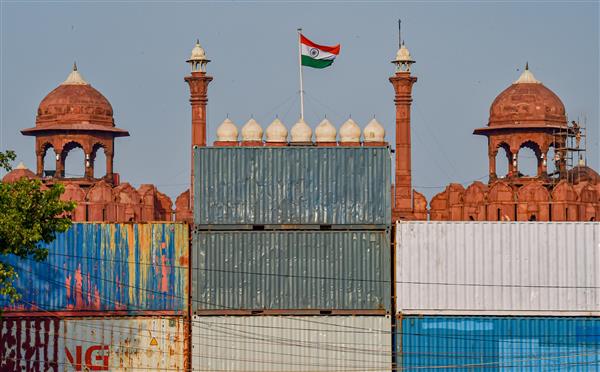 A wall made from shipping containers put up outside the Red Fort to create a barricade as part of security arrangements ahead of the upcoming Independence Day, in New Delhi, Tuesday, Aug. 2, 2022. PTI

The Delhi Police on Friday designated a five-kilometre radius around the historic Red Fort as a “no kite flying zone” till Prime Minister Narendra Modi hoists the tricolour at the Mughal era monument on Independence Day.

The city police took to Twitter to inform about the development.

“As a security measure, Red Fort & the 5 KM radius around the monument is declared as a ‘No Kite Flying Zone’, till the flag-hoisting ceremony & the Hon’ble Prime Minister’s address to the Nation on August 15,” it tweeted.

Earlier last month, the Delhi Police commissioner had issued an order prohibiting the flying of aerial objects like paragliders, hang gliders, and hot air balloons, ahead of Independence Day celebrations.

The order will remain in force in the national capital till August 16 for security reasons.

According to the order, it has been reported that certain criminal, anti-social elements or terrorists inimical to India may pose a threat to the safety of the general public, dignitaries and vital installations by using sub-conventional aerial platforms like paragliders, paramotors, unmanned aerial vehicles (UAVs), microlight aircraft, remotely piloted aircraft, hot air balloons, small sized powered aircraft, or even by para-jumping from aircraft, among others.