India and China may be in for a long haul of military posturing along the Line of Actual Control (LAC) in Ladakh.

Senior officials of the Indian Army and the Peoples Liberation Army, China met for almost six hours to end the month-long tension filled impasse along the Line of Actual Control (LAC) in Ladakh.

India pressed for restoration of status quo ante , as on April and also cited how China was in violation of all agreements, protocols and laid down drills relating to maintaining ‘peace and tranquillity’ along the LAC  and for conduct of soldiers. Also New Delhi’s military officials asked the PLA to demolish all structures that it has built in disputed areas along the un-demarcated LAC. The stress was at the area called ‘finger 4’ north of the Pangong Tso – a 135 km glacial-melt lake.

Status quo ante would mean pulling back troops, tanks guns which have been amassed by both sides in the past five weeks 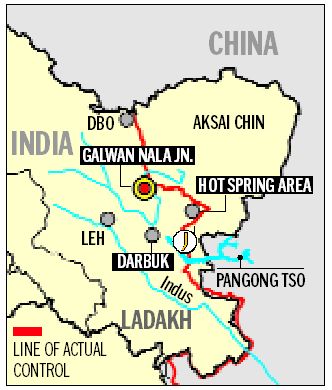 Status quo ante would mean pulling back troops, tanks guns which have been amassed by both sides in the past five weeks.

Till writing this report, the Indian Army, the Ministry of Defence or the Ministry of External Affairs have not made an official statement on the outcome of the meeting.

The Indian delegation was led by Lt General Harinder Singh, the commander of the Leh based 14 Corps met with South Xinjiang military Commander Maj Gen Lin Liu at Moldo at the designated meeting point at Chushul-Moldo, some 200 km south east of Leh. The meeting started around 11.30 am, it had a break for lunch around 2.30 pm and was resumed after that. Officials in Delhi said the meeting was on till 7 pm.

The meeting has come about after almost a dozen meetings between commanders at the level of Major General and Brigadier had not succeeded.

News agency PTI cited an unnamed official saying “talks were held in a positive atmosphere. The approach (by both sides) was positive”.

Separately sources in the military establishment said it would be incorrect to assume that this matter would be sorted in one meeting. The Military commanders of either side would send their respective reports to New Delhi and Beijing, where an appreciation would be made of the ground situation.

The Indian Military report is expected to highlight issues which are absolutely not acceptable on ground.

The Ministry of External Affairs had stated last week that the two countries will resolve their differences in keeping with the five frameworks which have been inked since 1993.

Don’t confront patrols in disputed areas, show a banner and both sides retreat. Reality: India being confronted, no impact of any banner.

Control over flying of aircraft. Reality: The LAC is seeing unprecedented activity by copters.

A high-powered committee to address issues and situation that may arise near order LAC has been activated.