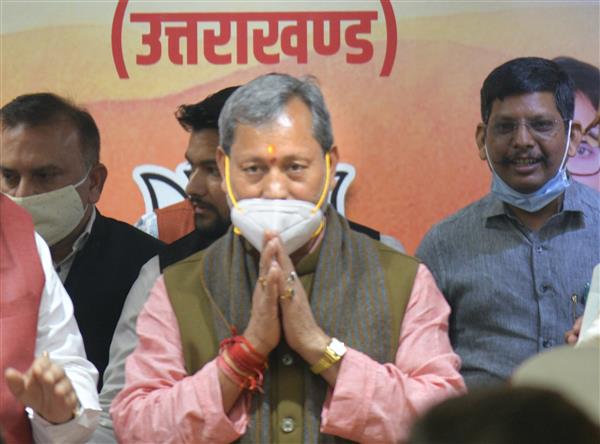 Women are flooding Twitter with photos of them wearing ripped jeans with the hashtag #RippedJeans to protest against Uttarakhand Chief Minister Tirath Singh Rawat’s controversial remarks.

Uttarakhand Chief Minister Tirath Singh Rawat has criticised women for wearing ripped jeans and wondered what values they will impart to their children, triggering a protest from opposition parties.

Speaking at an event on Tuesday, Rawat said that due to a lack of values, youngsters today are following strange fashion trends and consider themselves to be big shots after wearing jeans ripped at the knees. Women also follow such trends.

The chief minister said these days youngsters go to the market to buy ripped jeans. If they can’t find one, then they cut their jeans using scissors.

Rawat went on to describe the attire of a woman who sat next to him on a flight.

In a statement, Uttarakhand Congress chief Pritam Singh termed Rawat’s remarks “shameful” and demanded that he apologise to women.

In solidarity with the woman with the two kids trying to get somewhere who bore the brunt of a clearly sleazy man checking her out because she was wearing ripped jeans. #RippedJeansTwitter pic.twitter.com/N3fWgvlCBD

She advised the chief minister to avoid making such comments and said they can hurt the public sentiment.