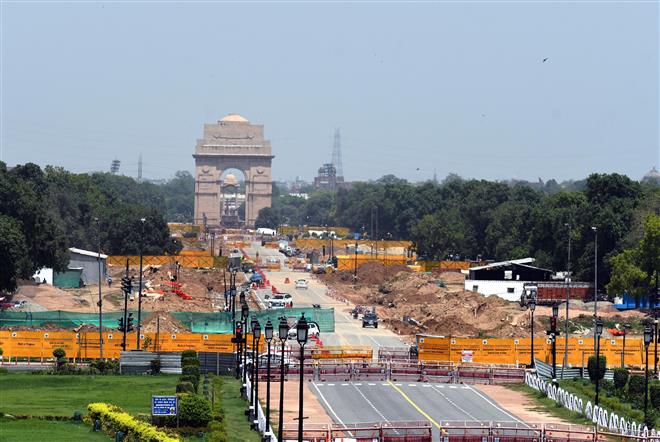 The government has so far spent Rs 418.70 crore on the redevelopment of Central Vista Avenue along Rajpath stretching from Vijay Chowk to India Gate, and the first phase of the project is targeted to be completed by May this year, the Rajya Sabha was informed on Monday.

On December 2, 2021, the Union ministry of housing and urban affairs had informed the Lok Sabha in a written reply that the redevelopment work was expected to be completed by December 2021 and the estimated cost was Rs 608 crore.

The Republic Day parade this year was held on the redeveloped Rajpath as the stretch required for the same was completed first under the Central Vista Avenue redevelopment project.

In a written reply to a question on Monday, Minister of State for Housing and Urban Affairs Kaushal Kishore said the entire Central Vista Avenue along Rajpath is being redeveloped from Vijay Chowk to India Gate.

He said that the major elements of the project are pedestrian underpasses, public facilities, parking, redevelopment of lawns, refurbishment of water bodies, walkways, lighting, CCTV cameras, irrigation system and others.

“The expenditure incurred till date is Rs 418.70 crore which is being met from Major Head 4059 of Ministry of Housing and Urban Affairs. The first phase of the project is targeted to be completed by May 2022,” Kishore told Rajya Sabha.

In response to another question on reports that there had been a 25 per cent jump in the estimated cost of a new parliament building and mega Central Vista redevelopment project, the minister replied, “No, sir”.

He said the construction of the new parliament building is targeted to be completed by October 2022.

Tata Projects Limited is constructing a new parliament building while Shapoorji Pallonji and Company Limited is executing the redevelopment work of the Central Vista Avenue.

In October last year, Larsen & Toubro Limited had been awarded the contract for the construction and maintenance of the first three buildings of the Common Central Secretariat.

In November, a Jharkhand-based firm, Kamladityya Construction Pvt Ltd, had been awarded the contract for constructing a vice president enclave.

The redevelopment of the Central Vista, the nation’s power corridor, envisages a new parliament building, common central secretariat, revamping of the 3-km Rajpath from the Rashtrapati Bhavan to India Gate, new office and residence of the prime minister, and a new vice-president enclave.