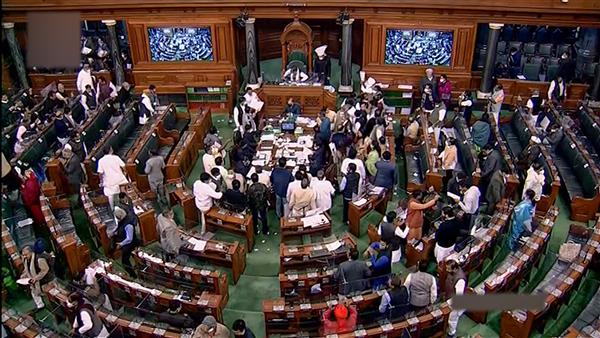 Opposition MPs protest in the Lok Sabha during the Winter Session of Parliament, in New Delhi, on Monday, December 20, 2021. LSTV/PTI photo

Ruckus continued in the Lok Sabha with opposition demanding the resignation or dismissal of minister of state for home Ajay Mishra Teni over the Lakhimpur Kheri incident.

While Congress and the TMC members were demanding sacking of Mishra, DMK members protested against the arrest of Tamil Nadu fishermen by the Sri Lankan Navy. Some opposition leaders also pointed the “absence” of Prime Minister Narendra Modi from the House.

Interestingly, despite all the ruckus the House managed to take up all the 20 oral answers listed, a rarity in itself, and one of the reasons was that several questions could not be taken up for supplementaries as members who were supposed to ask them were absent. They also included BJP members.

The Speaker, in fact, managed to complete the list before the stipulated time and adjourned proceedings till 12 noon.

Prime Minister Narendra Modi, who recently warned party MPs of “changes” if they continue to skip Parliament proceedings at a recent Parliamentary party meeting, has been continuously emphasising on regular attendance in Parliament.

Later, Singh was quoted as saying that though he was in the House he stepped out for some work just before his name was called out. He said he rushed back but his question had already called. Some said they did not ask supplementary questions as they were satisfied with the answer provided.

A person can only ask a question after his or her name has been called.

The absence of BJP MPs was pointed out by Opposition members, including Congress’ Gaurav Gogoi.

Incidentally, this was the third time in its history that the Lok Sabha managed to take up all 20 starred questions during Question Hour. The last two times was March 14, 1972, and on November 27, 2019.

Meanwhile, amid slogan shouting during the Question Hour, the members of NCP, Shiv Sena, BSP and IUML stood near their respective seats in solidarity. Lok Sabha Speaker Om Birla also urged members to maintain the decorum of the House and return to their seats.

“During the Question Hour, there were important issues and questions. Solutions for important issues and problems will come only if you go back to your seats…develop a good tradition in the House. People have sent you here to raise their questions, their problems. Is the behaviour right…I will give your adequate time and opportunity permission to speak on important issues,” the Speaker said.