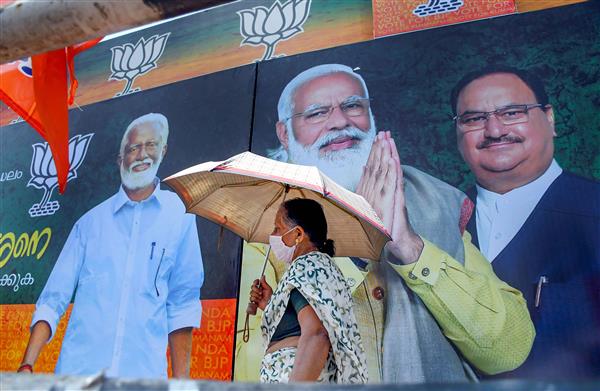 An elderly woman, holding an umbrella, walks past a BJP election campaign poster ahead of Kerala assembly polls, in Thiruvananthapuram on March 17, 2021.

In a setback to the BJP-led NDA in Kerala, the nomination papers of its candidates from Thalassery, Guruvayur and Devikulam constituencies for the April 6 Assembly polls were rejected by the Returning Officers after scrutiny.

The rejection of nominations of party candidates in Thalassery in Kannur district and Guruvayur in Thrissur district has come as a rude shock for the BJP, which is seeking to emerge as an alternative to both the CPI(M)-led LDF and UDF headed by the Congress in Kerala.

The nominations of the BJP candidates in Thalassery and Guruvayur were rejected for want of mandatory documents, they said.

With the rejection of nomination, the party has no candidate in the fray in Thalasserry where it had secured the highest number of votes,(22,215) in the north Kerala district, considered a bastion of the CPI(M),in the 2016 Assembly polls.

Haridas said the party will move the Supreme Court challenging the decision of the Returning Officer.

Talking to reporters, he said there was only a “minor mistake”—lacking a signature—in his papers but the returning officer did not agree with it.

“We were asked to provide before 3 pm.Although we had provided it online, it was not accepted,” he said.

BJP’s Guruvayur candidate Nivedita, who is the president of the party’s state Mahila Morcha, claimed there was only a minor technical error in her nomination but the returning officer refused to give a relaxation.

She said she would fight it legally.

BJP sources said the party does not have dummy candidates in Guruvayur and Thalassery, while the nomination of AIADMK’s dummy candidate was rejected at the time of submission.

The CPI(M) alleged that with the rejection of nomination of the NDA candidates in three constituencies, it will create a situation of trading of BJP votes in favour of the Congress-led UDF in these constituencies.

The Congress hit back, saying the NDA candidates submitted the incomplete nomination papers for helping the CPI(M) in the elections. — PTI