Ruling NDA better placed this time to win Presidential poll on its own : The Tribune India

Alliance is in power in 17 states, including UP 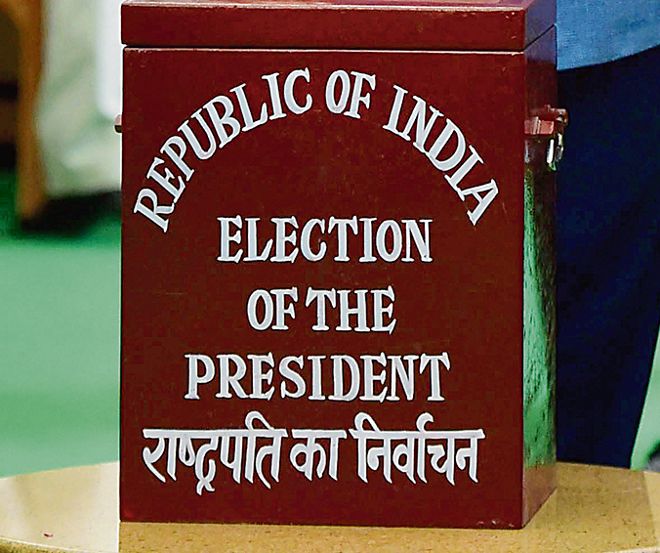 With victories in four out of five state elections recently and major gains expected in the upcoming Rajya Sabha poll, the BJP-led NDA is better placed this time to win the presidential election due in a few months on its own, as compared to 2017 when it banked on the support of like-minded parties, including the TRS, YSRCP and the BJD.

The ruling alliance is in power in 17 states, including UP. The electoral college for the presidential poll comprises 543 LS members, 233 RS members and 4,120 MLAs with fixed vote value of 708 for every MP. The vote value per MLA ranges from the highest of 208 (UP Assembly) to the lowest of seven (Sikkim Assembly).

The cumulative value of votes in the electoral college is 10.98 lakh with the halfway mark at 5.49 lakh, if all votes polled are valid. In the 2017 presidential election, NDA’s Ram Nath Kovind emerged victorious after polling 7,02,044 votes of the 10,69,358 valid votes polled. Opposition’s Meira Kumar got 3,67,314 votes.

An analysis of the current party position in both Houses reveals that NDA-plus (including AIADMK’s 6 MPs in both Houses) has around 437 MPs and will improve its position further once elections to 72 RS vacancies (out of which seven are nominated MPs who don’t vote in presidential poll) between April and July are filled. The BJP expects to win at least half of the 65 seats and could touch 5.6 lakh votes on its own even if it wins 30.

With its current position in Parliament, the BJP is comfortably placed to win the presidential poll on its own this time. RS elections to 65 seats are likely to take place before the presidential election, with the tenure of Kovind ending on July 24. NDA’s current tentative vote in Parliament and across state assemblies comes to 5.38 lakh (2.29 lakh in state assemblies and 3.09 lakh in Parliament). This cumulative value is higher than the halfway mark of 5.34 lakh of the 2017 election and near the halfway mark (5.49 lakh) of the entire electoral college (10.98 lakh votes), if all votes polled are valid. If BJP wins even 30 seats in the upcoming elections to 65 RS seats, its total votes would reach 5.6 lakh.

This would mean the ruling alliance may not need non-NDA support to secure victory in the presidential election. 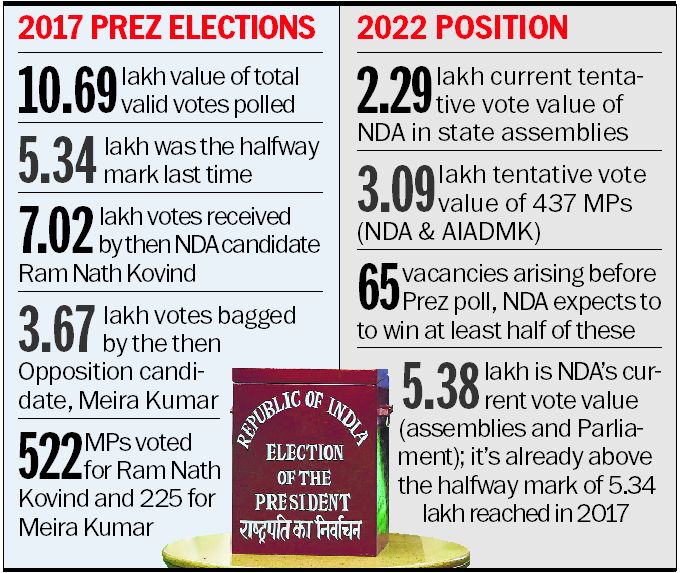