Russia, Europe to dispatch oxygen as China offers to help

No breakthrough in vaccine raw material stalemate with US 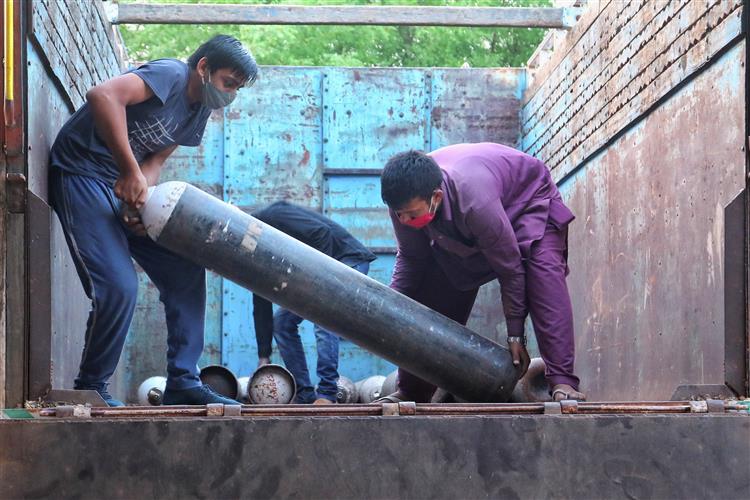 Workers unload oxygen cylinders during the preparation of 5000 beds COVID-19 care centre at Radha Swami Satsang Bhawan at Beelwa, on the outskirts of Jaipur. PTI

As the number of COVID-19 patients remained high, Russia, UK, France and Germany among other countries have offered to gift oxygen generating equipment to India.

Germany will be the first to send nearly two dozen oxygen generation plants and France and the UK have also said they are prepared to follow suit.

The Russian offer for oxygen as well as remdesivir injections came on Friday when India notched the world’s highest daily tally of COVID-19 cases for the second consecutive day.

Russia has offered to provide medical-grade oxygen and anti-viral drug remdesivir. India, grappling with a record shortage of both products, can begin receiving shipments in a fortnight.

Moscow has also offered four lakh remdesivir injections every week.  The injections have a going rate of Rs 30,000-40,000 in the black market.

India has already waived the import duty on remdesivir.

Russia is also dispatching emergency doses of Sputnik-V vaccine due to a slowdown in production in India after the US put curbs on export of raw material for the vaccines.

Sources said till its India-made vaccine hits the market in sufficient numbers, India is exploring the possibility of “full and fill” Sputnik vaccines.

On the continuing US ban on export of raw materials that goes into the manufacturing of vaccines in India, the sources said, “we have raised at high levels and they have been receptive”.

In Beijing, the Chinese Foreign Ministry said China was ready to offer assistance according to India’s needs.

Hoping that India will defeat the virus at an early date, Foreign Ministry spokesperson Zhao Lijian expressed Beijing’s sincere sympathies to India over the deteriorating situation in the country recently.

“China is ready to provide support and help according to India’s need, and is in communication with the Indian side on this,” said Zhao when asked at the media briefing on Friday about the kind of help that China can offer and also whether China is having communications with India on providing help.