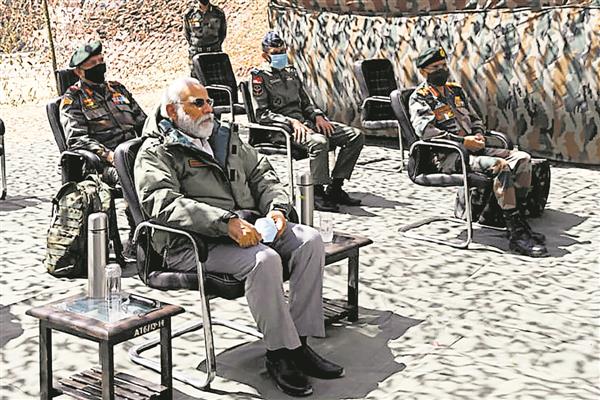 PM Narendra Modi with military commanders in Leh on Friday.

Over the past few days, India has briefed the envoys of most major countries, including EU members, Japan, US, France and Germany, on the tensions with China across the Line of Actual Control (LAC).

Russia, for its part, has promised to step up cooperation saying it was not interested in acting as a mediator in the border dispute. “I think any intervention in such a delicate matter as border dispute is not just inexpedient, but can also seriously hurt the efforts Beijing and New Delhi are independently making to find a way out of this situation,” said a senior Russian official. At the same time, he underscored that India and China were capable of finding solutions without any mediation from third parties.

Any intervention in such a delicate matter as border dispute is not just inexpedient, but can also seriously hurt the efforts Beijing and New Delhi are independently making to find a way out of this situation—  Russian official

Significantly, Prime Minister Narendra Modi had initiated a phone call with Russian President Vladimir Putin on Thursday during which both sides had resolved to strengthen their bilateral partnership.

Though US Defence Secretary Mark Esper twice called up Defence Minister Rajnath Singh in a gesture of solidarity and French counterpart Florence Parly had condoled the deaths of soldiers in Galwan Valley, India’s first port of call for solidarity and military hardware after the June 15 LAC clash has been Russia.

Foreign Secretary Harsh Vardhan Shringla on Friday briefed Japanese Ambassador Satoshi Suzuki on the situation along the LAC. “Japan also hopes for a peaceful resolution through dialogue. Japan opposes any unilateral attempt to change the status quo,” Suzuki observed after the briefing. South Block has also provided its version of the tensions on the LAC to envoys from EU, US, France, Germany and Russia.

While India-China tensions continued, Moscow had initiated a meeting of RIC Foreign Ministers. In continuation with this dual-track policy, Russia on Thursday initiated a virtual meeting of sherpas from the five BRICS countries —Brazil, Russia, India, China and South Africa — in which MEA Secretary Sanjay Bhattacharya participated.

On the bilateral front, Russia said it did not set any limits. “There is an expression ‘the sky’s the limit’. For Russia and India, the sky is not the limit,” Russian Deputy Foreign Minister Igor Morgulov said in an interview with TASS news agency.

Russia found itself in the ideal position to play the role of ice-breaker as it has mutually-exclusive defence and energy ties with both China and India. During the epidemic, as against China-baiting by the West, Moscow saw Beijing as the first victim of Covid rather than the initiator.

Touching on the existing problems in the Indian-Chinese relations, Morgulov said the border dispute was “undeniable”, but it did not interfere with trilateral cooperation.

Interestingly, the Russian media is rounding off its reports on the LAC tensions by citing Indian figures for the fatalities — 20 Indian soldiers killed and 76 wounded while 45 Chinese soldiers were killed or wounded.