The defence minister said the delivery of the first indigenously built aircraft carrier, Vikrant, would be 'another milestone' event 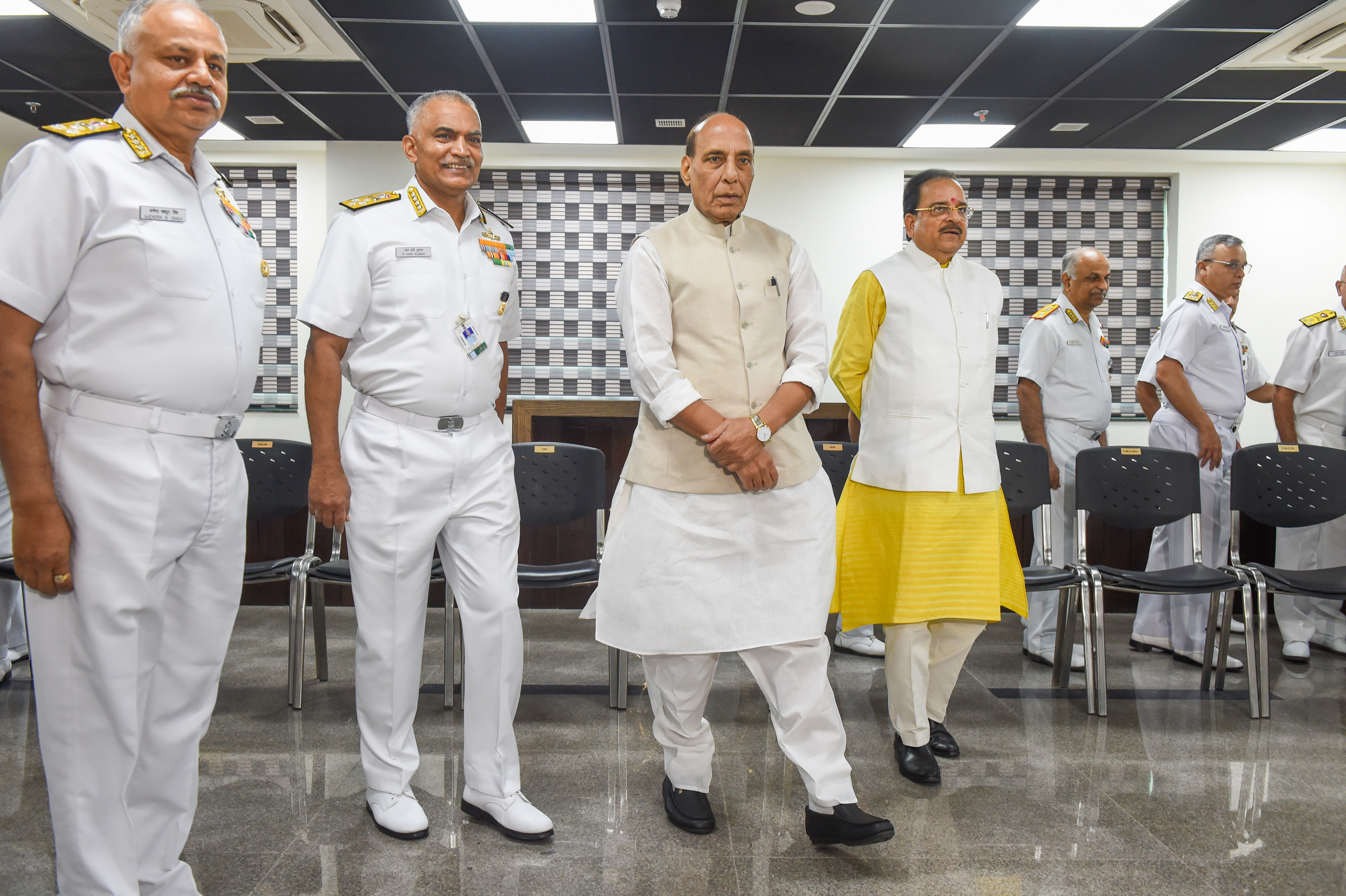 Defence Minister Rajnath Singh said on Thursday the Russia-Ukraine conflict has highlighted that being self-reliant in military hardware is a vital necessity, even as he called for tri-services synergy in dealing with national security challenges.

In an address at the Navy Commanders’ Conference, he said “jointness” in operations will be critical in any future wars and restructuring of military commands and establishment of theatre commands is the way ahead.

“I am aware that adequate progress has been made towards the study on maritime theatre command,” he told the commanders.

According to the plan, each of the theatre commands will have units of the Army, the Navy and the Air Force and all of them will work as a single entity looking after security challenges in a specified geographical territory under an operational commander.

“Coming to the prevailing security environment in the world, the ongoing Russia and Ukraine conflict has once again highlighted that being self-reliant without dependencies is a vital necessity,” Singh said.

In the last few years, the government has been focusing on making India a hub of defence manufacturing.

The defence minister said the delivery of the first indigenously built aircraft carrier, Vikrant, would be “another milestone” event.

“All out efforts need to be made so that the ship is delivered and commissioned in the 75th year of our Independence. This would be a fitting tribute to the ‘Azadika Amrit Mahotsav’,” he said.

The defence minister also noted that 39 ships and submarines out of 41, which are on order, are being built in Indian shipyards.

“While the Navy has been at the forefront of indigenisation, it is important for us to leverage on the momentum that we have gained thus far. I urge the senior leadership to maintain their focus on futuristic capability development to ensure that the nation’s maritime power grows in tandem with our economic interests,” Singh said.

In his address, Singh reiterated that the sovereignty of India and prosperity is dependent on the armed forces.

“Therefore, the need for a strong and credible Indian Navy cannot be over emphasised. I am conscious of the importance of long-term funding for the sustained growth of the Navy and the Navy’s consistent performance in optimally utilising the allocated budget,” he said.

Singh said the Indian Navy, over the years, has maintained a high tempo of operations and established a credible and responsive presence in the Indian Ocean Region through mission-based deployments.

“These deployments have reaffirmed Indian Navy’s position as the preferred security partner in the Indian Ocean Region,” he said.

The defence minister complimented the Navy for its professionalism and dedication with which they continue to perform the duty of safeguarding India’s maritime interests.

“I am cognisant that India’s maritime character and its vital geostrategic location have played a primary role in our growth as a nation and evolution as a civilization,” he said.

“With increasing dependence on the seas for national development and engagement with the world, the Indian Navy, continues to protect India’s maritime interests and enables a safe and secure environment in the region,” he added.

The naval commanders carried out a comprehensive review of the country’s maritime security preparedness as well as possible implications of the Ukraine crisis for regional security among other issues.