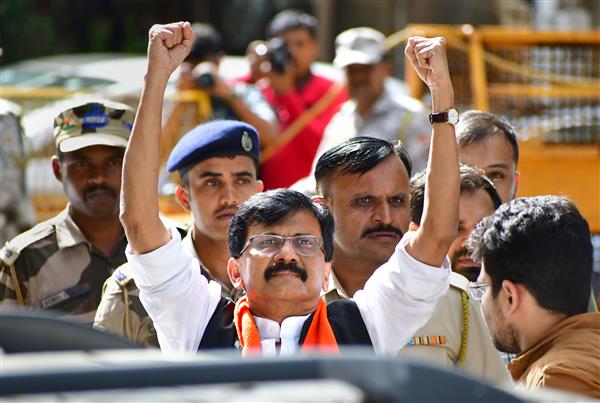 Sanjay Raut after appearing before a special PMLA court in Mumbai. PTI

Raut was produced in a special court under the Prevention of Money Laundering Act (PMLA) in Mumbai, which remanded him in four-day ED custody till August 4.

Shiv Sena chief Uddhav Thackeray today visited Raut’s residence in Mumbai and met his family members and was reported to have said that the ED action against the party leader “is nothing but political vendetta”.

Raut and his family received “proceeds of crime” worth over Rs 1 crore generated out of alleged irregularities, the ED told a special court in Mumbai on Monday.

The ED had in April this year provisionally attached assets worth over Rs 11.15 crore belonging to his wife Varsha Raut and two of his associates as part of the investigation into the case.

With the Opposition targeting the government in the Rajya Sabha over the arrest, the ruling BJP said the government did not interfere in the working of enforcement agencies and that law would take its own course. “We are lawmakers, not law-breakers,” Leader of the House in the RS Piyush Goyal said.