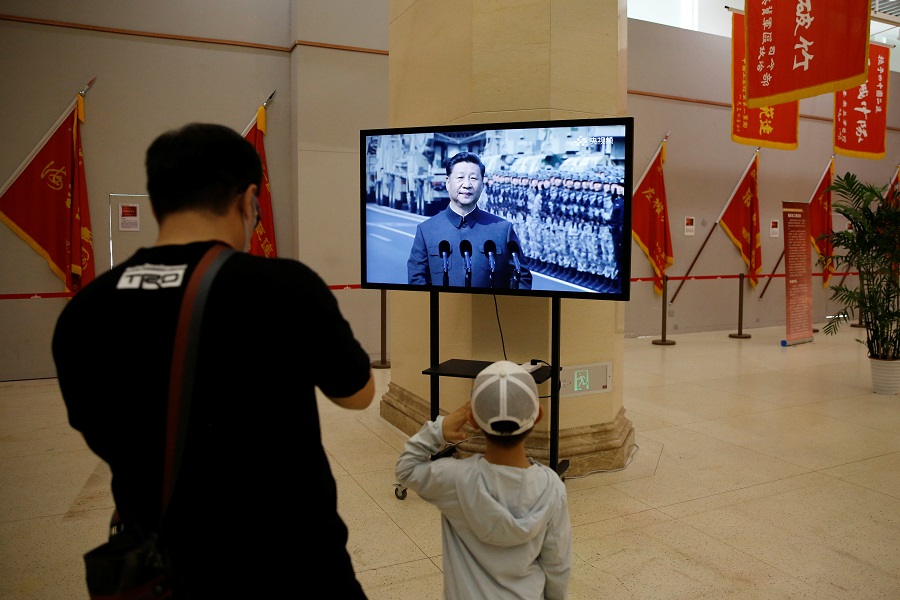 Visitors watch video footage of Chinese President Xi Jinping reviewing the troops during the military parade marking the 70th founding anniversary of Peoples Republic of China on October 1, 2019, at the Military Museum of the Chinese Peoples Revolution in Beijing, on Tuesday. Reuters

Chinese President Xi Jinping on Tuesday ordered the military to scale up the battle preparedness, visualising the worst-case scenarios and asked them to resolutely defend the country's sovereignty.

Xi, 66, who is also the General Secretary of the ruling Communist Party of China (CPC) and head of the two-million-strong military with prospects of lifelong tenure in power, made the remarks while attending a plenary meeting of the delegation of the People's Liberation Army (PLA) and People's Armed Police Force during the current parliament session being held here.

Xi ordered the military to think about worst-case scenarios, scale up training and battle preparedness, promptly and effectively deal with all sorts of complex situations and resolutely safeguard national sovereignty, security and development interests, state-run Xinhua news agency reported, without mentioning any specific issues that posed a threat to the country.

His comments came in the backdrop of the continuing standoff between the militaries of India and China at the Line of Actual Control (LAC).

Several areas along the LAC in Ladakh and North Sikkim have witnessed major military build-up by both the Indian and Chinese armies recently, in a clear signal of escalating tension and hardening of respective positions by the two sides even two weeks after they were engaged in two separate face-offs.

The nearly 3,500-km-long LAC is the de-facto border between the two countries.

The US-China military frictions were also on the rise with the US navy stepping its patrols in the disputed South China Sea as well as the Taiwan Straits. Washington and Beijing are also engaged in a war of words over the origin of the coronavirus pandemic.

On Sunday, Chinese State Councilor and Foreign Minister Wang Yi criticised the attempts of some US politicians to blame China for the pandemic. The US, he said, was pushing ties with China to "the brink of a new Cold War".

On May 22, China, the second-largest military spender after the US, hiked its defence budget by 6.6 per cent to USD 179 billion, nearly three times that of India, the lowest increment in recent years amidst the massive disruption caused to the communist giant's economy by the COVID-19 pandemic.

In his meeting with a PLA delegation on Tuesday, he stressed on achieving the targets and missions of strengthening the national defence and armed forces for 2020, while maintaining effective epidemic control on a regular basis.

He listened to speeches by the military deputies on fulfilling epidemic control tasks, strengthening training amid the epidemic, and accelerating capacity building on biosecurity defence, among others.

Commending their role in battling the COVID-19, Xi said the people's armed forces have once again proven themselves to be heroic forces that can be fully trusted by the Communist Party and the people.

Xi said the epidemic has brought a profound impact on the global landscape and on China's security and development as well.

Xi demanded reform and innovation to address new situations and problems exposed in the epidemic and ordered accelerating the research and development on COVID-19 drugs and vaccines by tapping the advantages of military medical research.

Noting that this year marks the end of the 13th five-year plan for military development, Xi said extraordinary measures must be taken to overcome the impact of the epidemic to ensure major tasks on the military building are achieved.

On defence expenditure, Xi said “every penny must be well spent to produce maximum results”.

Xi has been stressing on the troops battle preparedness ever since he came to power in 2012 insisting on real time exercises to win wars.

He has also revamped defence forces, cutting the PLA's strength by three lakh troops and enhanced its naval and air power as Beijing expanded its influence abroad.

Meanwhile, a Chinese expert commented that unlike the previous standoffs between the Chinese and Indian armies, the latest border friction was not caused by accident, but was a planned move of New Delhi.

"India has been crossing the boundary line into the Galwan Valley region and entering Chinese territory. Indian soldiers have also deliberately instigated conflicts with their Chinese counterparts. If India failed to stop such provocations as soon as possible, it will impact on Beijing-New Delhi ties - and may even exceed the sort of intensity of the Doklam standoff, an article in the state-run Global Times written by Long Xingchun, president of Chengdu Institute of World Affairs, said.

India has said the Chinese military was hindering normal patrolling by its troops along the LAC in Ladakh and Sikkim and strongly refuted Beijing's contention that the escalating tension between the two armies was triggered by trespassing of Indian forces across the Chinese side.

The Ministry of External Affairs said all Indian activities were carried out on its side of the border, asserting that India has always taken a very responsible approach towards border management. At the same time, it said, India was deeply committed to protect its sovereignty and security.

"Any suggestion that Indian troops had undertaken activity across the LAC in the Western sector or the Sikkim sector is not accurate. Indian troops are fully familiar with the alignment of the Line of Actual Control in the India-China border areas and abide by it scrupulously," MEA Spokesperson Anurag Srivastava said at an online media briefing last week. PTI