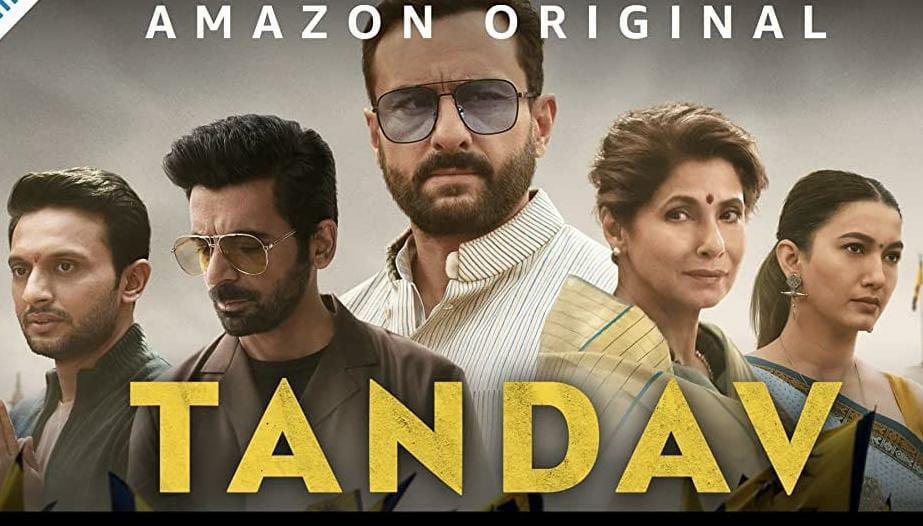 At least two scenes were removed from the controversial web series “Tandav”, which found itself in more trouble on Wednesday with an FIR against its makers, this time in Madhya Pradesh, and threats of another in Maharashtra.

A scene of a play and a conversation between two key characters were snipped from the first episode “Tanashah”, a day after the cast and crew of the nine-part starry political saga on Amazon Prime Video once again apologised and said they had decided to implement changes to address the concerns raised.

At the centre of the row over the show, which has hit the national headlines with calls for boycotts, FIRs and protests over its alleged depiction of Hindu deities, was a scene with Zeeshan Ayyub in the role of college student Shiva playing the Hindu god Mahadeva (another name for Lord Shiva) in a play. A conversation between Lord Shiva and Narad Muni in the theatre production raised hackles.

That scene has gone. Viewers now see Zeeshan's entry on stage as Mahadev amid cheers from the audience and the scene then abruptly shifts to police entering the campus to arrest a student.

Also gone is a conversation depicting prime minister Devki Nandan Singh, played by Tigmanshu Dhulia, insulting Dalit leader Kailash Kumar, enacted by Anup Soni. There have been other changes in the series as well. A dialogue referencing caste between Soni's character and Sandhya Mridul's Sandhya has been shortened.

Maharashtra Home Minister Anil Deshmukh said police in the state had received a complaint and formal action would be taken in accordance with the law.

Demanding a law from the Centre to regulate content on the over the top (OTT) platforms to ensure there is no caste-based discrimination or communal divide, Deshmukh told reporters, "We have received a complaint. We will register an FIR and take action formally." He did not specify who had lodged the complaint.

A four-member team of Uttar Pradesh Police, where three FIRs have been filed, also arrived in Mumbai in the morning to conduct a probe into a case registered in Lucknow. The team is likely to record statements of the makers and cast and crew of the show, which has been accused of hurting religious sentiments for its depiction of Hindu deities.

While some members visited the office of the Deputy Commissioner of Police (Detection-1) in suburban Andheri, two members went to the Mumbai Police headquarters in south Mumbai, officials said.

Keeping up the tempo, an FIR against the makers and cast was registered in the Madhya Pradesh town of Jabalpur on a complaint from a functionary of a little known Hindutva outfit.

"The process to verify the facts mentioned in the FIR filed against the director of web series 'Tandav' and others for allegedly promoting enmity in different religious groups and hurting religious feelings is on," Jabalpur's Additional Superintendent of Police (ASP) Amit Kumar told reporters.

In a related development, Madhya Pradesh Assembly protem Speaker Rameshwar Sharma wrote to Maharashtra Chief Minister Uddhav Thackeray demanding an FIR on the complaint filed by BJP MLA from Mumbai Ram Kadam and asking him "to take forward the legacy of" Bal Thackeray.

In Uttar Pradesh, FIRs against the show have been filed in Lucknow, Greater Noida and Shahjahanpur. The complainants have alleged inappropriate depiction of UP Police personnel, Hindu deities, and adverse portrayal of a character playing prime minister in the political drama.

On Monday, Chief Minister Yogi Adityanath's media advisor Shalabhmani Tripathi said the makers of "Tandav" will have to pay the price for hurting religious sentiments.

In a statement on behalf of the cast and crew of the series, the makers on Monday had apologised if they had "unintentionally" hurt anyone's sentiments with their fictional show. They followed it up on Tuesday with another apology statement, thanking the Ministry of Information and Broadcasting for its "guidance & support" in the matter.

"The cast & crew of Tandav have made the decision to implement changes to the web series to address the concerns raised towards the same," the team said.

The makers said they had "utmost respect" for the sentiments of the people and did not intend to hurt or offend the sentiments of "any individual, caste, community, race, religion or religious beliefs or insult or outrage any institution, political party or person, living or dead…" While many political leaders, particularly from the BJP, have spoken out, mainstream showbiz personalities have largely been silent, barring director Hansal Mehta and actor Swara Bhasker.

"I'm a Hindu and I'm not offended by any scene in #Tandav .. Why #banTandavSeries #BanTandavNow ???" Bhasker tweeted on Tuesday.

Most recently, Netflix show “A Suitable Boy”, based on Vikram Seth's bestselling novel, attracted the ire of the right wing for a scene showing a Muslim man and a Hindu girl kissing in the backdrop of a temple.

Before that was Amazon's “Pataal Lok” that got into trouble for its depiction of communal issues, and “Leila”, which was called "anti-Hindu" for depicting the dystopian future of Aryavarta where purity of blood is enforced.

The government recently brought OTT platforms such as Netflix, Amazon Prime Video and Disney+ Hotstar, besides other online news and current affairs content, under the ambit of the Ministry of Information and Broadcasting, giving it powers to regulate policies and rules for the digital space. — PTI