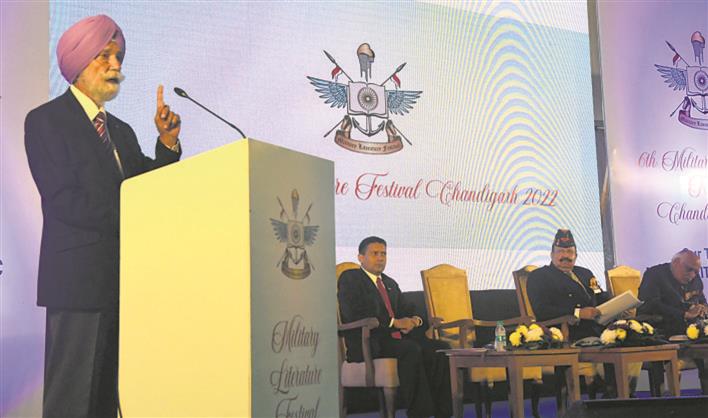 Changing ethos in the Army has translated into cross-generational leadership and today we have the “scholar-warrior”, who infuses dissent, said Lt Gen BS Jaswal, former General Officer Commanding-in-Chief, Northern Command, on the second day of the Military Literature Festival here today.

The Agnipath scheme is a major change that affects the current structure of Army units. It will be prudent to hasten slowly and tinker with the scheme as we go along. Maj Gen Raj Mehta (retd)

“Today’s generation wants to ask ‘why’ of everything, which was not the case earlier. One has to mould oneself accordingly,” he said while moderating a session on “Ethos of Soldiering in India”.

“Soldiering without ethos is defunct. A warrior’s ethos shapes the outcome of battles by infusing leadership, courage, patriotism, sacrifice, commitment and loyalty. Leadership is not about impressing anyone, but about making an impact,” Lt Gen Jaswal said.

Maj Gen Raj Mehta (retd) cited the examples of Indian commanders and said personality played an important role in leadership and could turn despair into confidence.

Maj Gen PJS Sandhu (retd) said, “Steadfastness in a battle is the hallmark of the Indian soldier. In the Indian context, completing a mission takes precedence over other tasks.”

Experts discussed the prevailing instability in Pakistan and its impact on India during a panel discussion, with the opinion being that the neighbouring country would continue to face problems.

Shalini Chawla, a fellow at the Centre for Air Power Studies, New Delhi, said: “The newly appointed Pakistan army chief has a daunting task ahead as he needs to revive the army’s position and respect in society.”

Punjab Chief Minister Bhagwant Mann has said democracy in India is flourishing only because the armed forces maintain a constant watch on the borders in adverse conditions, while other citizens sleep comfortably in their homes.

“Democratic institutions in India remain strong and robust. Though the country attained Independence 75 years ago, it is important to preserve freedom,” he said at the closing ceremony of the literature festival.