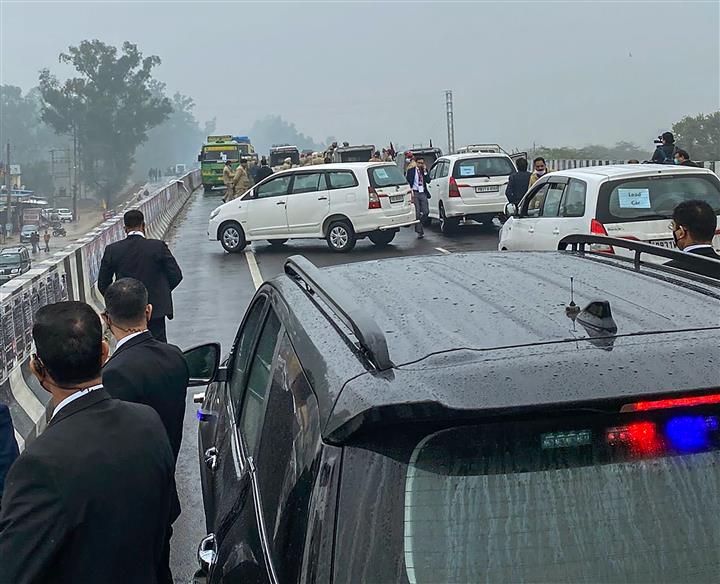 Prime Minister Narendra Modi on Thursday briefed President Ram Nath Kovind on the "security breach" that stalled his Punjab visit and the government indicated that some “big and tough decisions” will be taken after the Union Home Ministry gathers information.

Punjab Chief Minister Charanjit Singh Channi claimed that what happened in Ferozepur wasn’t a security threat but a “gimmick” aimed at imposing President’s Rule on the state.

The Supreme Court also took note of the matter and the Punjab government announced a two-member committee to probe the episode, as the BJP and the Congress continued to spar over it.

BJP leaders offered prayers at temples in different parts of the country for a long life for the PM. They also posted their wishes and prayers for Modi on Twitter, using the hashtag “LongLivePMModi”.

In what the Centre described as a “major security lapse”, Modi’s convoy was stranded Wednesday on a flyover due to a blockade by farm protesters in Ferozepur.

He returned from poll-bound Punjab without attending any event, including a rally, and the Centre blamed the Congress government in Punjab for the breach. CM Channi, however, claimed that a last-minute change of travel plans by Modi led to the situation.

On Thursday, his government constituted a two-member committee to conduct a “thorough probe” into the incident.

The panel of retired Justice Mehtab Singh Gill and Principal Secretary, Home Affairs and Justice, Anurag Verma will submit its report on the “lapses” in three days.

In Delhi, Union minister Anurag Thakur indicated that the Home Ministry will act on the security breach.

“The home ministry has also spoken about taking action. After gathering information, whatever steps... big and tough decisions will be taken by it,” he told reporters during a briefing on a cabinet meeting.

“It is my firm belief that the country’s judicial system does justice to everyone and when such mistakes happen, whatever steps need to be taken will be taken,” the minister added.

“President Ram Nath Kovind met Prime Minister Modi at the Rashtrapati Bhavan today and received from him a first-hand account of the security breach in his convoy in Punjab yesterday,” the President’s secretariat said on Twitter.

“The President expressed his concerns about the serious lapse,” it added.

Earlier, Vice President M Venkaiah Naidu spoke to the PM and expressed his deep concern over the incident.

The Supreme Court will on Friday hear a plea seeking a thorough investigation into the security breach. A bench headed by Chief Justice N V Ramana took note of senior advocate Maninder Singh’s submission on the issue.

“Serve the copy (of the petition) to the state government. We will take it tomorrow as the first item,” the bench, also comprising Justices Surya Kant and Hima Kohli, said.

Hours after his government announced a probe into the “lapses” in Ferozepur, CM Channi took an aggressive stand at a public meeting in Hoshiarpur’s Tanda.

He maintained that the security threat claim was “cheap theatrics” that did not behove a leader of the PM’s stature.

The CM claimed that Modi cancelled his trip because of the “thin” crowd at the rally venue, and there was a “conspiracy” to defame the state.

“Yesterday’s gimmick by the PM and his coterie is aimed at imposing President Rule in the state,” he said.

In Uttarkashi, Defence Minister Rajnath Singh said if the safety of the prime minister cannot be ensured, it would be difficult to prevent the “disintegration of the country’s democratic institutions.”

The Punjab BJP said it did not have any expectations from the probe committee set up by the state government.

“The chief minister is the conspirator of this conspiracy. What will this committee set up by his government do?” Punjab BJP president Ashwani Sharma told reporters after meeting the Governor.