Select government with caution as you do while fixing marriage: Nadda : The Tribune India

Select government with caution as you do while fixing marriage: Nadda

'When you go to fix a marriage, you do it after enquiring everything', said Nadda 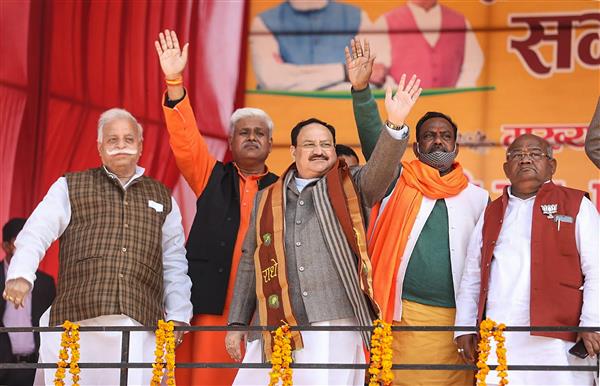 BJP National President JP Nadda waves at the people during a public meeting for upcoming UP assembly polls at Ramlila Maidan, in Sitapur. PTI

As Uttar Pradesh voted for the first phase of the assembly polls, BJP president J P Nadda on Thursday said voters should select a government based on past performances rather than promises, just as marriages are fixed after making a thorough enquiry.

Addressing a rally in the Biswan area of Sitapur district, Nadda claimed that the BJP is the only national party left in the country, while the others have been reduced to a family or a region.

“Voters should not judge political parties by what they promise but rather by what they have done in the past.

“When you go to fix a marriage, you do it after enquiring everything. So when you are selecting a government for five years, you must find out about the party that is coming to power,” Nadda said.

Taking a swipe at political rivals, he said, “Tell me whether the National Conference and the PDP are parties of families or not? In Haryana, isn’t the Lok Dal a party of a family? In Uttar Pradesh, isn’t the Samajwadi Party of one family?” “Isn’t the RJD in Bihar a party of a family? In West Bengal, the party of Mamata (Banerjee) belongs to a family, is it not,” he further asked.

Nadda then went on to name the Biju Janata Dal in Odisha, the TDP and the YSR Congress in Andhra Pradesh, KCR’s party in Telangana, the DMK in Tamil Nadu, besides the Shiv Sena and the NCP in Maharashtra.

The India National Congress has been confined to some states, he added. “It is no longer a national party. It has become the party of brother and sister,” Nadda said in a jibe at the party.

While other political parties seek votes on the basis of caste and region, BJP is the only party that talks of “Sabka Saath, Sabka Vikas, Sabka Vishwas”, he said.

“We never asked for anyone’s caste before opening their Jan Dhan accounts or providing free gas cylinders under the Ujjawala scheme. We have also built houses and provided ownership of these house to women. We have done women empowerment by doing so,” Nadda said.

He said the BJP has set up two All India Institutes of Medical Studies in Uttar Pradesh.

Besides, Uttar Pradesh is the only state with five international airports, he said, adding that the party must be elected to power again to ensure this developmental work continues.

“We have also asserted that we will keep the state free of riots, terrorists and those who support them,” he said, referring to the saffron party’s manifesto for the state.

Anti-terrorist training centres are being constructed in Deoband, Meerut, Kanpur, Azamgarh and Bahraich to ensure that people live in a terror-free environment, the BJP chief added.

He said hundreds of riots occurred under the Samajwadi Party government but none took place in the last five years under the leadership of Yogi Adityanath with blessings of Narendra Modi.

Talking about the Muzaffarnagar riots, Nadda said 93 people were killed in it, and the court had said that the law and order had failed to prevent it.

“Akhilesh Yadav called the main accused of those riots and tried to save them on the direction of Azam Khan,” he alleged.

Hitting out at Yadav, Nadda said as chief minister, he had taken back cases against the accused for the bomb blasts in Gorakhpur.

In another incident, a CRPF camp in Rampur was attacked in which seven soldiers were killed. Seven people were arrested in the case but Akhilesh Yadav tried to take back the case against them on the direction of the person who is currently fighting the election from jail, Nadda claimed, apparently referring to Azam Khan.

“Akhilesh safeguarded terrorists despite taking oath of the Constitution. The rule of the SP was a dark phase for Uttar Pradesh,” he claimed.