SC Bench ejected the plea of the Uddhav Thackeray-led faction 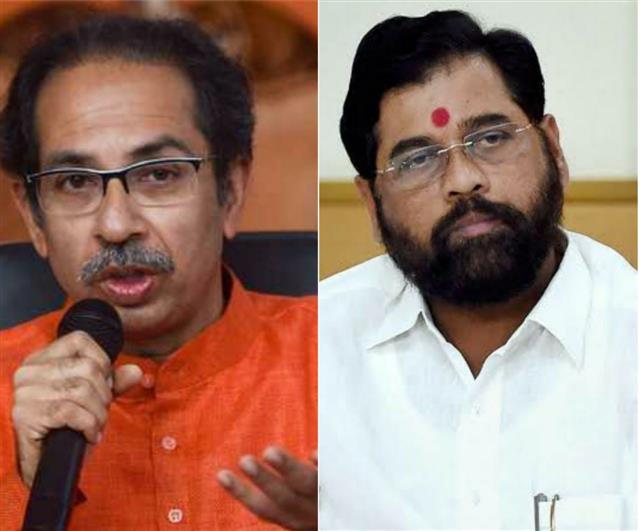 The Supreme Court Tuesday allowed the Election Commission to go ahead with the hearing of Maharashtra Chief Minister Eknath Shinde group's plea seeking recognition as the real Shiv Sena and allocation of the party's bow-and-arrow poll symbol to it.

Justice DY Chandrachud, heading a constitution bench, rejected the plea of the Uddhav Thackeray-led faction seeking to restrain the EC from deciding the state's ruling Shinde camp's claim over the "original" Shiv Sena.

“We direct that there would be no stay of the proceedings before the Election Commission," the bench also comprising Justices M R Shah, Krishna Murari, Hima Kohli and PS Narasimha said.

Senior advocate Kapil Sibal, appearing for the Thackeray faction, challenged Shinde's locus to approach the poll panel seeking claim over the party and its election symbol.

Sibal submitted the Election Symbol Order can be invoked only when the claimant belongs to the same political party but claims to be of a rival group.

“I am saying Shinde is no longer in the party and membership has been given up. How does the EC hear him then?” Sibal said, referring to the disqualification notice issued against Shinde and some other Shiv Sena MLAs who had rebelled against then Chief Minister Uddhav Thackeray in June this year.

Senior advocate Arvind Datar, appearing for the poll panel, said the Election commission is free to decide who constitutes the aspect of majority.

Solicitor General Tushar Mehta, appearing for Maharashtra Governor BS Koshiyari, contended the Election Commission is only deciding which faction is the "real" party and so it should be allowed to proceed with Shinde's plea.

Shinde group's counsel and senior advocate NK Kaul submitted an election symbol is not the property of an MLA and to which faction it belongs has to be decided by the Election Commission, asserting the poll panel cannot be prevented from taking any decision on the issue.

The bench was hearing pending cases related to the political crisis in Maharashtra that began with Shinde group's revolt against Uddhav Thackeray's leadership which led to the fall of the three-party Maha Vikas Aghadi (MVA) government in the state.

The bruising political battle had resulted in a slew of petitions getting filed in the Supreme Court by the rival factions, and the apex court referred those to a five-judge bench on August 23, saying the conflict had raised several constitutional questions related to defection, merger and disqualification.

It had asked the EC not to pass any orders on the Shinde faction's plea that it be considered the "real" Shiv Sena and granted the party's poll symbol, the bar which was lifted on Tuesday.

Though the Shinde faction has formed a coalition government with the BJP in Maharashtra and enjoys the support of an overwhelming majority of MLAs who had won on Shiv Sena tickets, the Election Commission cannot recognise it as the original party simply on that basis.

The EC will have to consider the support each faction enjoys in the party's legislative and organisational wings. In such cases, the poll panel also goes through the party constitution and the list of office bearers submitted to it by the party when it was united.

The top court had said the petitions brought forth important constitutional issues relating to the 10th schedule of the Constitution pertaining to disqualification like the powers of the speaker and the governor, and the scope for judicial review.

It said the proposition of law laid down by the constitution bench in the Nabam Rebia case relating to the 10th schedule stands on a contradictory reasoning which requires "gap filling" to uphold constitutional morality.

Following a political crisis in Arunachal Pradesh in November 2015 when 21 Congress MLAs rebelled against Chief Minister Nabam Tuki, and a string of events that followed, a five-judge bench of the Supreme Court had unanimously ruled that a state governor's powers to summon, dissolve and advance an assembly session is within the scope of judicial review.

Articles 32 and 226 relate to powers of the Supreme Court and high courts respectively with regard to a citizen's right to seek constitutional remedy if their fundamental rights have been infringed.