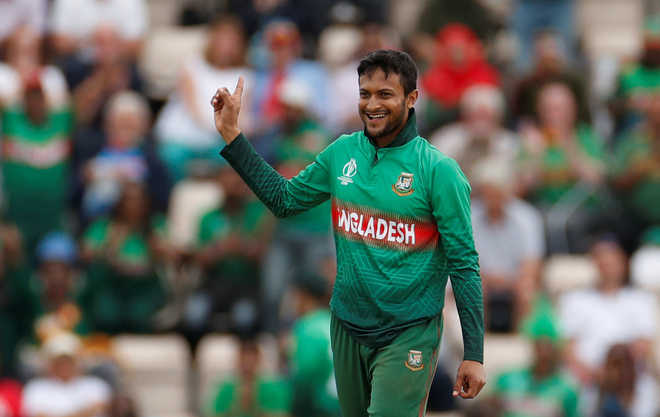 Abject surrender of Bangladeshi cricketer, Shakib Al Hasan, after allegedly receiving death threats from a fanatic Islamist has enraged the Taslima Nasreen, the Bangladeshi authoress, who was hounded out of her country for refusing to apologise for her criticisms against the religion.

Hasan, an ace all-rounder, buckled under the threat after a young man from Sylhet, Mohsin Taklukdar, came on Facebook Live, and said, that he "would kill the cricketer for daring to inaugurate a Kali Puja in Kolkata".

Swinging a Katana-like sword, Talukdar said, that how could the Bangladeshi cricketer associate himself with idol-worshipping despite being a Muslim.

Rattled by this threat, the Bangladeshi southpaw shared a video on YouTube, which showed him promising to be a better Muslim, and never do anything in the future, that could hurt the sentiments of his co-religionists.

Describing himself as a "proud Muslim", Hasan said, that he had only lit a lamp in the community Kali Puja in Kolkata after being requested by local Trinamool Congress MLA Paresh Paul.

"Being a Muslim, how can I inaugurate a Kali Puja", a meekly Hasan said.

Hasan's capitulation prompted Taslima Nasreen to call him "selfish", and one who does not mind compromising with evil.

"It's not uncommon for Muslims to go to Puja fest in Bangladesh. Shakib didn't need to say, that he's a proud Muslim, he won't go to puja fest, his religion is above other religions. He is protected, the terrorist was arrested. Famous people are so selfish, they compromise with evil forces”, Nasreen took to the microblogging website.

“Hundreds of thousands of Islamists took to the streets in Bangladesh for demanding my execution by hanging and set a price on my head for criticising Islam, govt filed a case against me for committing blasphemy. But I didn't apologise. A lone man threatened Sakib &Shakib apologised! Shame”, she wrote in a series of tweets.

Shakib enraged Islamists in Bangladesh after he showed up at the Kali Puja of “Amra Shobai Club” at Kankurgachi in Kolkata.

Mohsin’s controversial video posted on Sunday has been shared by 400 users. While the video on Talukdar’s Facebook wall has been frozen, the shared videos could still be accessed.

Bangladesh police on Tuesday arrested a man who allegedly issued death threats to cricket all-rounder Shakib Al Hasan for inaugurating a Kali puja pandal in Kolkata, even as the cricketer issued an apology and said he only joined the function briefly.

“He is now in our custody awaiting subsequent legal procedures,” a police officer familiar with the development told PTI.

After the cricketer’s picture at the programme in Kolkata’s “Amra Sobai Club” went viral, Talukdar went live on Facebook on Sunday night carrying a large machete in his hand and threatened to kill Shakib, saying he hurt his religious sentiments by inaugurating the Puja event in the West Bengal’s capital city.

By early morning, Talkudar, however, withdrew the threat and apologised in another live video on social media and then went into hiding. He was later traced in neighbouring Sunamganj district. His wife was previously detained for questioning.