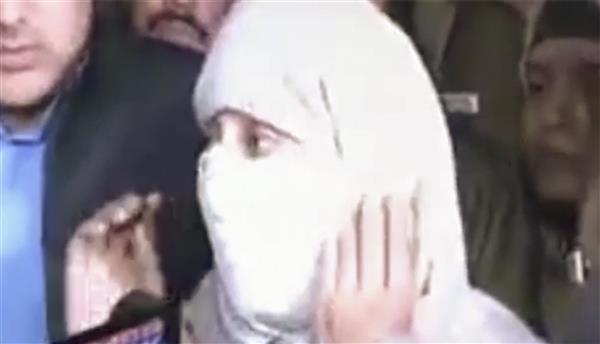 Friend of the woman who was killed after being dragged by a car in Sultanpuri area, speaks to media over the incident, in New Delhi, Tuesday, Jan. 3, 2023. PTI photo

Police have traced a woman who was riding pillion with 20-year-old Anjali Singh on her scooter but had fled after their scooter was hit by a car on New Year in outer Delhi and have recorded her statement, officials said on Tuesday.

The woman was Singh’s friend and had escaped with minor injuries in the accident while Singh was dragged under the car for 12 km, they said. Since she was scared, she fled when the accident took place leaving Singh behind, Sagar Preet Hooda, Special Commissioner of Police (Law and Order) said at a press conference here.

The police said the victim’s friend did not tell anyone about the accident and was traced after CCTV footage was examined.

“So, now we have an eyewitness to the incident and she is cooperating with the police. We are getting her statement recorded under section 164 CrPC. This is a significant development in the incident.

“This will be important evidence for us to get the accused punished,” Hooda said.

Anjali Singh was killed in the early hours of the New Year after her scooter was hit by a car, which dragged her for 12 km. Her body was found in Kanjhawala area.

“Investigation is still underway. It is at the primary stage and multiple angles are being probed. We are hopeful of completing the investigation soon and we will ensure that the accused get the strictest punishment,” Hooda added.

Sources said that the accused tried to avoid police pickets placed on the stretch between Kanjhawala and Aman Vihar and kept roaming in the area and took three U-turns.

The woman, a Sultanpuri resident, worked part-time with an event management firm.

The five men who were allegedly in the car were booked for culpable homicide among other sections on Monday even as the police came under charges of conducting a “shoddy investigation” in the matter.

The Delhi Police has also constituted an inquiry committee, headed by Special Commissioner Shalini Singh, and asked her to submit a probe report as early as possible, officials said.

All five accused were sent to a three-day police custody on Monday.

The accused had told the police they had first gone to Haryana’s Murthal for a dhaba food to mark the New Year. They were drunk at the time of the incident and hit Anjali’s scooter while they were returning.

Anjali Singh’s friend, who did not wish to be named, said they had gone to meet her friends at a hotel on Saturday night.

“She was drunk and even fought with me. We left the hotel at around 1.45 am (Sunday) and she wanted to drive the scooter but I insisted that I will drive.

“We left and initially I rode the two-wheeler but she threatened to jump from the vehicle if I did not allow her to ride. She kept saying, ‘It is my scooter and I will drive’,” she claimed while speaking to PTI.

The victim’s friend alleged the occupants of the car knew that Anjali was being dragged, but they kept moving the car.

“They deliberately committed this crime. She was continuously screaming, but they didn’t stop the vehicle. I fled the spot out of fear and did not inform anyone about the incident.The vehicle dragged her in forward direction twice and backwards then again they took the vehicle forward and she got entangled under it further...,” she told reporters.