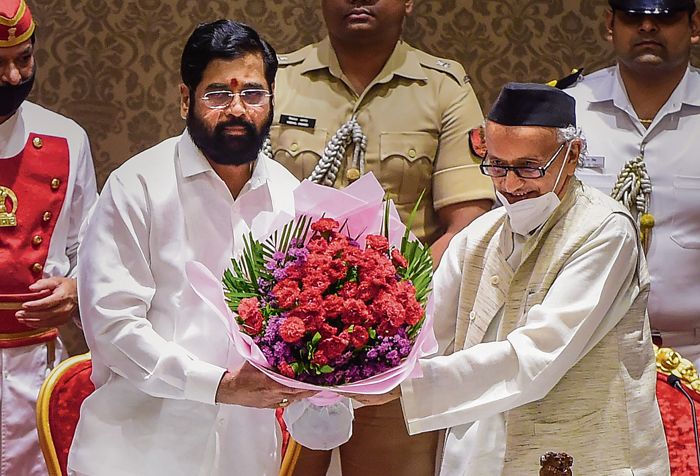 Ten days after he led a rebellion in the Shiv Sena and brought down the Uddhav Thackeray-led Maha Vikas Aghadi government, dissident leader Eknath Shinde was on Thursday sworn in as the 20th Chief Minister of Maharashtra. In a surprise move, ex-CM and BJP stalwart Devendra Fadnavis, who was anticipated to take charge of the top post, took oath as Shinde’s deputy.

Fadnavis, who had earlier announced he would remain out of the new government, changed his stance following prodding from the BJP’s central leadership. Minutes before the swearing-in, BJP chief JP Nadda announced that Fadnavis should be a part of the government “to fulfil the aspirations of the people”. This led to speculations, including that the former CM perhaps was “upset” over Shinde being anointed the CM. “The BJP’s central leadership has decided that Fadnavis should be a part of the government.... I request him to take charge as the Deputy CM,” Nadda said. Home Minister Amit Shah said on Nadda’s insistence, Fadnavis had decided to join the government, “showing a big heart” and as a “sign of true loyalty towards Maharashtra and the interests of the people”.

Next, fight for name and party symbol

‘will a Shiv Sainik become CM, if I resign,’ Uddhav had challenged

Sources said Fadnavis was not interested in the Deputy CM’s post, but the central leadership “directed” him to be there in a controlling position to ensure smooth functioning of the government while keeping in mind Shinde’s inexperience and also the interests of the BJP’s state leadership and cadres.

Earlier, while assuring all support to Shinde, Fadnavis told the media that he would not join the government. “After the swearing-in ceremony, we will have a Cabinet expansion and Shiv Sena and BJP leaders will take oath. I will stay out of the government,” said Fadnavis, taking by surprise even the state BJP leaders who had been waiting for a party-led government in the state for two-and-a-half years.

Taking on former CM Uddhav Thackeray after being administered oath by Governor Bhagat Singh Koshiyari at the Raj Bhavan, Fadnavis said in the 2019 Assembly elections, the BJP and the Shiv Sena had contested together and “secured majority”. “Shiv Sena chose to go with those against whom (Sena founder) Balasaheb Thackeray fought throughout his life. The Sena formed alliance with those who are against Hindutva. On one hand Shiv Sena opposed Dawood (Ibrahim) and on the other, they kept such a man in the Cabinet who went to jail on allegations of helping Dawood,” he said.

Claiming that most Sena MLAs were demanding that the alliance with the Congress and the NCP be snapped, Fadnavis said Uddhav “ignored” them and gave priority to MVA alliance partners to run a “corrupt and incompetent government”. Calling the BJP-Shiv Sena a “natural alliance”, Shinde said they tried telling this to Uddhav. “This is not about power. It’s about the Hindutva ideology of Balasaheb Thackeray,” Shinde said. Together, the Shinde faction and BJP have the support of around 170 MLAs.