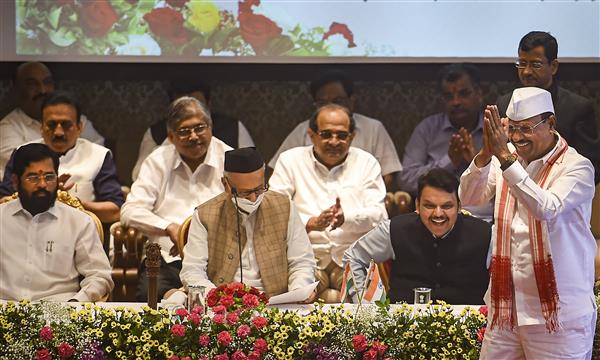 Forty-one days after taking oath as the Maharashtra Chief Minister, Eknath Shinde today expanded his Cabinet with 18 ministers taking oath, nine each from his rebel Shiv Sena group and the BJP. The list does not include a woman, for which rival parties slammed the BJP, given that the list had been “vetted by the central BJP leadership”.

Priyanka Chaturvedi, Shiv Sena MP owing allegiance to Uddhav Thackeray, said, “Can’t understand why women leaders in the BJP are treated like second-class citizens instead of equals... women empowerment to be expressed only in words, and not in action.” NCP MP Supriya Sule said this “showed the BJP’s mindset”. Deputy Chief Minister Devendra Fadnavis said women legislators would be inducted in the ministry in the next round of expansion.

Governor BS Koshyari administered the oath of office to the MLAs, including state BJP president Chandrakant Patil, taking up the strength of the Shinde Cabinet to 20. There is, however, still a scope for expansion as the maximum allowed strength is 43.

The induction of former minister Sanjay Rathod was not only opposed by Chaturvedi, but also state BJP vice-president Chitra Wagh. “It is unfortunate that Rathod, who caused the death of (TikTok star) Pooja Chavan, has been made a minister again. I will continue my fight against Rathod even though he has become a minister again,” Wagh was quoted as saying after the swearing-in.

A resident of Parli Vaijanath in Beed district, Pooja died last year after falling from the balcony of a flat in Pune’s Hadapsar area. Several photos and audio clips have surfaced allegedly linking Rathod to her suicide. Shinde defended Rathod’s induction saying the police had given him a clean chit.