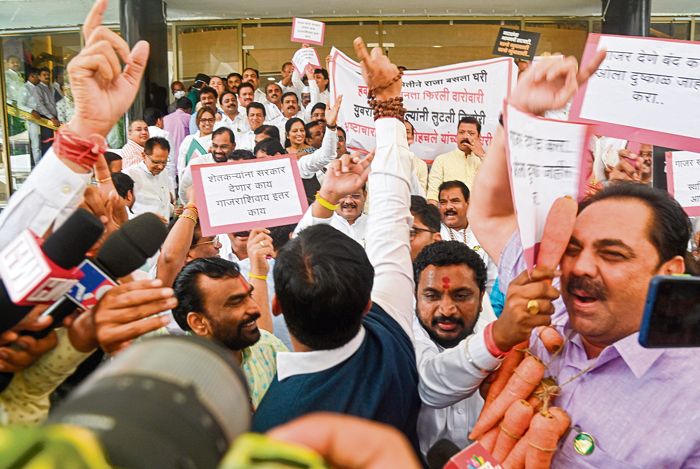 Opposition and rebel Sena MLAs raise slogans against each other outside the Assembly in Mumbai. PTI

Scuffles broke out between the legislators of the ruling alliance and Opposition on the premises of the Maharashtra legislature during the ongoing monsoon session on Wednesday. The unprecedented episode, which began with slogan-shouting on the steps to Vidhan Bhavan in south Mumbai around 11.30 am, saw legislators from the two sides pushing and shoving each other.

MLAs and MLCs of the Chief Minister Eknath Shinde-led Shiv Sena and its alliance partner BJP staged a protest on the steps, shouting slogans against Sena chief Uddhav Thackeray and his son Aaditya. Soon Nationalist Congress Party’s (NCP) legislators turned up, shouting slogans and carrying carrots which apparently symbolised the inducements which had allegedly led the Shinde faction to join hands with the BJP to bring down the Uddhav Thackeray government in June.

NCP MLA Rohit Pawar and Shinde faction’s MLA Pratap Sarnaik were seen pushing each other. Legislators of the ruling alliance carried banners with messages alleging corruption in the cash-rich BMC, controlled by the Thackeray-led Sena before its term ended.