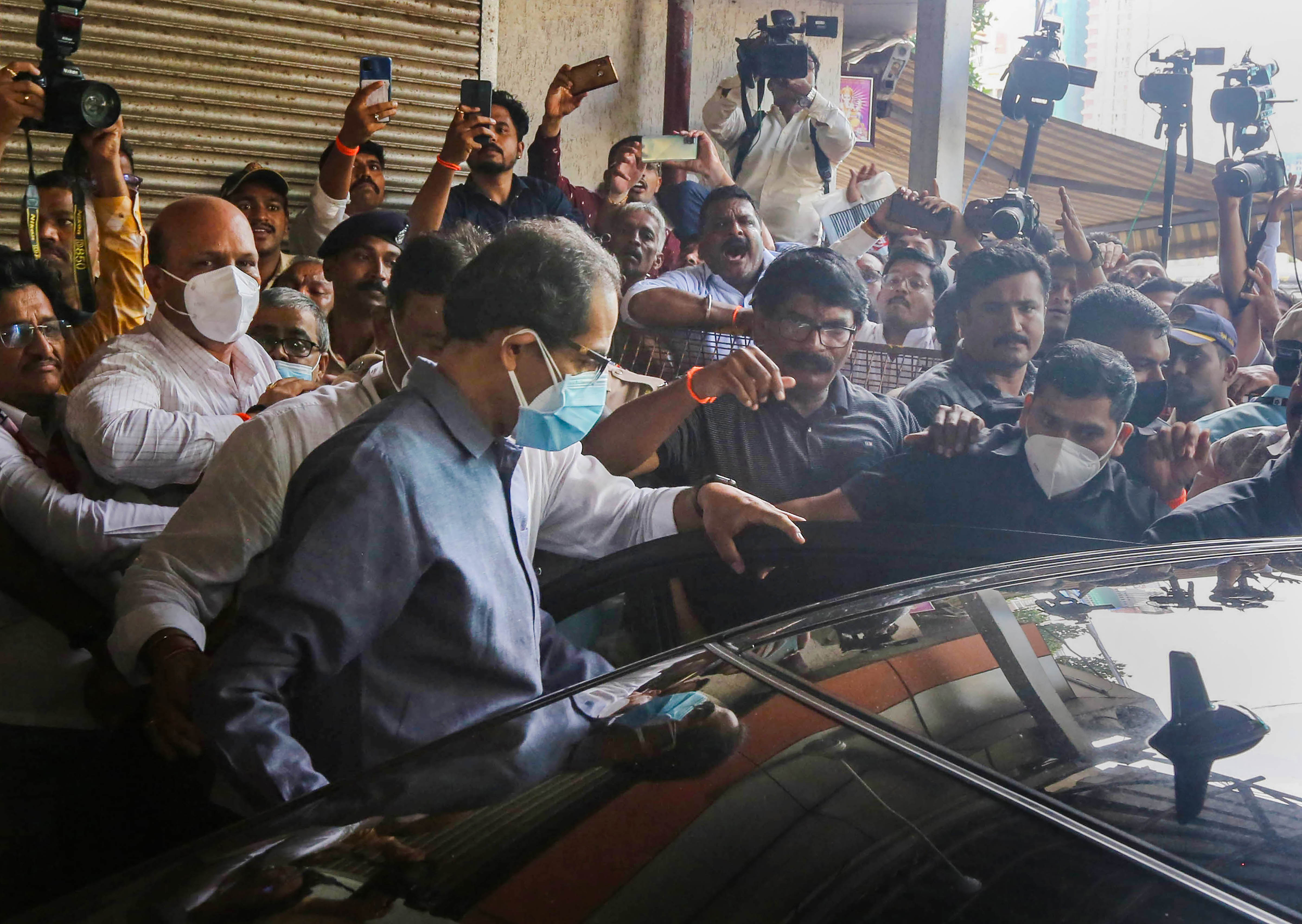 Maharashtra CM Uddhav Thackeray comes out of Sena Bhavan after a meeting, at Dadar in Mumbai on Saturday. PTI

The Shiv Sena national executive passed a resolution authorising Maharashtra Chief Minister Uddhav Thackeray to take action against “all those who have betrayed the party”.

The executive, however, refrained from taking immediate action against Shinde.

It also passed a resolution that no other political outfit could use the party’s name and that of its founder Bal Thackeray. This, after rebels indicated forming a new party called Shiv Sena (Balasaheb), claiming they were not joining the BJP.

The battle for the control of the Shiv Sena between party president Uddhav and rebel leader Shinde played out on the streets with cadres loyal to the Thackerays staging protests against the rebels, defacing their banners, hurling stones and vandalising the office of an MLA. Sena leader Sanjay Raut said: “The executive decided that the party belongs to Bal Thackeray and is committed to taking forward his ideology of ‘Hindutva’ and Marathi pride. The party passed a resolution, giving the powers to to Shiv Sena chief Uddhav Thackeray for intitiating action against those who have betrayed the party.” The Maharashtra legislature secretariat issued “summons” to 16 rebel MLAs, including Shinde, seeking their written replies by June 27 evening to the Shiv Sena complaint seeking their disqualification. The no-confidence motion against Deputy Speaker Narhari Zirwal was rejected on the ground of technicalities. Independent MLAs had submitted a fresh petition, sources said.

Amid incidents of violence and vandalism reported at properties of those belonging to his faction, Shinde alleged the Maharashtra Government had withdrawn the security cover provided at their residences.

The Aghadi government would be responsible if any harm was caused to their family members, rebels said, claiming the security cover had been withdrawn on the orders of Thackeray and Home Minister Dilip Walse-Patil, who termed the allegations “mischievous and false”. “Security of no MLA has been withdrawn. Keeping in view the prevailing situation, the Home Department has decided to provide security at the residence of MLAs to keep their families safe,” Walse-Patil said.

With passions running high among supporters on both sides, Raut said, “Shiv Sena means Thackeray.” The anger of his supporters was “natural”, he claimed. “The party cannot be hijacked with such ease. It has been made with our blood and no one can break it with money,” Raut said.