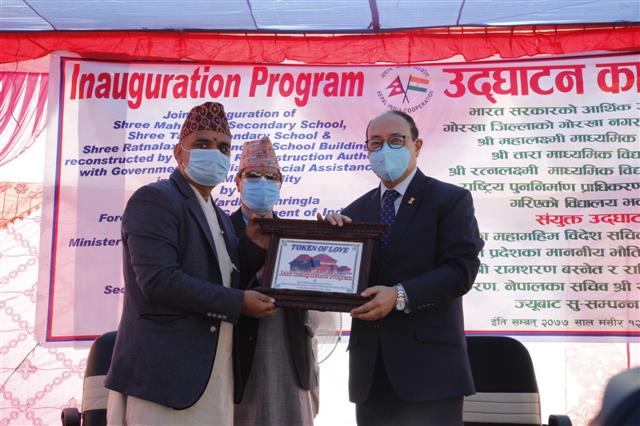 The Ministry of External Affairs also tweeted a video of the school inauguration event.

"FS@harshvshringla inaugurated the renovated Tashop (Tare) Gompa Monastery in the Manang district, that was done with Indian assistance and that exemplifies India-Nepal development and cultural cooperation," the Indian embassy tweeted.

"Buddhism is an important thread that connects India and Nepal," it added, quoting Shringla.

Earlier, delivering a talk hosted by the Asian Institute of Diplomacy and International Affairs (AIDIA) -- a Kathmandu-based non-partisan foreign policy think-tank, Shringla noted that after the 2015 earthquake, India cooperated with Nepal in the restoration of 30 heritage locations, including the iconic Seto Machindranath temple in Kathmandu, the Hiranyavarna Mahavihar at Patan and the Jangam Matha at Bhaktapur.

"Our best domain specialists are at the service of the living history of Nepal. Yet, our endeavours are meant to not only preserve and celebrate the past but also build and nurture the future," he said.

Inauguration of three school by Foreign Secretary @harshvshringla in Gorkha

The foreign secretary said given the young population—both in India and Nepal—education is a crucial bridge.

"Seventy schools and 150 health facilities are coming up in 12 districts of Nepal with Indian support," he said, adding that few projects are as satisfying as those that promote learning and the health for the well-being of our citizens.

These schools are being rebuilt as part of the Indian government's post-earthquake reconstruction works in Nepal with a grant of around Rs 184 crore.

Apart from the reconstruction of the schools, the Indian government has also extended a helping hand in rebuilding houses damaged in the earthquake in the Himalayan nation.

"The outlay of Indian earthquake-related assistance is USD 1 billion but its true value is not in monetary terms. It lies in how it has helped communities on the ground. To cite an instance, 46,000 houses have been built in Gorkha and Nuwakot. They incorporate earthquake-resilient technologies in line with your motto of 'Build Back Better'," Shringla said at the AIDIA event. PTI

Indian fan complains of racism at SCG during third Test

Sydney resident Krishna Kumar accused the security at the ve...